In today's market, there is a wide variety of monitor ports or display connections out there. Most monitors will have more than one type of video input connection or port.

Depending on the purpose of the monitor, you will find that it would have a combination of two different input ports.

A few of them are already obsolete when it comes to today’s standard but are still around.

With monitors for gaming, professional, and general use out there, here are the monitor ports that you should know about:

The 4 most commonly seen Video Connector types are:

Now lets get into the details of each of the connector ports and their benefits. If you just want to know which one is the best, then go for HDMI/DisplayPort.

If you run into compatibility issues uou can also use converter adapters to connect different kinds of ports. From example HDMI to VGA, VGA to HDMI and so on. These adapters are usually cheap.

The D-subminiature or D-sub for short is a common type of electrical connector used in computers. Cannon (not to be confused with the company Canon) introduced the use of the D-sub series of connectors in 1952.

There are many applications for the D-sub port, but perhaps the most popular D-sub connection was the VGA or “Video Graphics Array.” 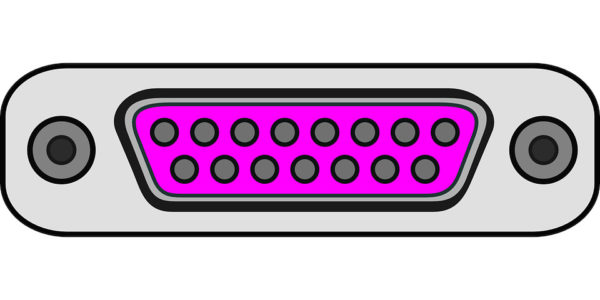 VGA was released in 1987 by IBM alongside the IBM PS/2. This configuration of the D-sub connection has three-rows with 15 pins. Three years after its release, the uses for VGA expanded from computer monitors to projectors and high definition television sets.

The early iterations of VGA were only capable of resolutions up to 640 x 480 with a refresh rate of 60 Hertz (Hz). Companies such as Apple (iBook), Macintosh (eMac), and HP (HP Mini and TouchSmart) had an implementation of a mini-VGA, which had two rows instead of three. 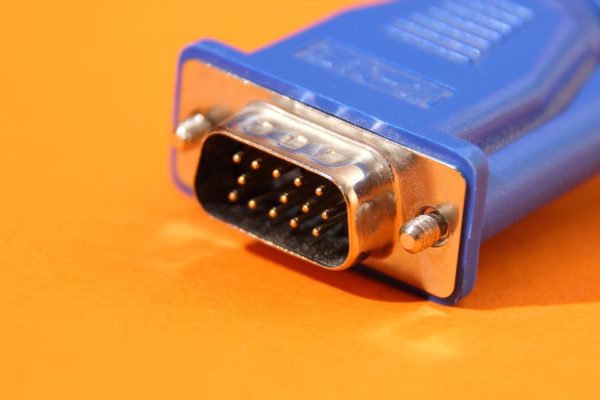 While VGA is an analog interface, further developments allowed it to support resolutions up to 1080p (1920x1080) of video at 60 Hz, but no audio.

Given the analog nature of its signal, there are only a handful of devices such as home players, projectors, and TVs that use VGA ports, with more manufacturers leaning onto digital modes of transmission for better quality. VGA is still in use for general purpose monitors; however, it is likely to be phased out in years to come.

Digital Visual Interface or DVI, for short, is a digital video display interface developed by the Digital Display Working Group. They released DVI in 1999 as an interface for transmitting uncompressed digital video intending to create an industry standard for digital video content.

DVI cards allowed configuration to support multiple modes with the use of different cables. These configurations were:

DVI was compatible with the VGA interface since it can support analog connections. This compatibility, together with a clearer and sharper picture and video quality, led to the widespread acceptance of DVI in digital display standards.

Its applications are the same as VGA, flat-screen LCD monitors, and digital projectors. Apple even implemented Mini-DVI and Micro-DVI in its products like the iMac, MacBook, and Mac mini.

However, while able to support digital video, DVI, like VGA, does not support audio.

Perhaps the most widely used port since its introduction, High Definition Multimedia Interface or HDMI for short, was released in late 2002 and was designed by the HDMI Founders, a group of companies, namely: Hitachi, Panasonic, Philips, Silicon Image, Sony, Thomson, RCA, and Toshiba.

The goal for HDMI was to create an interface that could support both video and audio while being backward-compatible with DVI. HDMI carries uncompressed digital video and audio signals, with several developers implementing advanced but optional features such as 3D and Ethernet data connectivity (HDMI Ethernet Channel).

Nowadays, most monitors have HDMI as the primary display input port. However, HDMI is not just limited to monitors. We see HDMI ports in TVs, multimedia players, game consoles, projectors, DVRs, etc. Since its introduction, HDMI has seen multiple revisions. Among these revisions are HDMI 1.4, the 2.0 specification being the most common, and HDMI 2.1 on the rise.

HDMI 1.4 was the most common version used in consumer devices and general use monitors before the release of HDMI 2.0. It has a maximum bandwidth of 10.2Gbps (gigabits per second), which allows it to support the following resolutions:

It’s worth mentioning that HDMI 1.4 is limited to 8-bit color, which means it is unable to support High Dynamic Range or HDR.

HDMI 2.0 is currently the most prominent in the consumer display market because of the rise of 4K resolution TVs and both professional and gaming monitors since its release in 2013. It has a maximum bandwidth of 18Gbps, 8Gbps more than the previous HDMI 1.4. Thanks to the extra bandwidth, HDMI 2.0 supports the following resolutions:

Since its release in 2018, HDMI 2.1 is catching on. The release of HDMI 2.1 gave way to enhanced Audio Return Channel (eARC), allowing speakers and audio equipment to receive audio signals from monitors or screens.

HDMI 2.1 also implements Display Stream Compression (DSC). DSC allows virtually lossless image compression, thus increasing the amount of data that can be carried by the display interface. Having a maximum bandwidth of 48Gbps, nearly tripling that of HDMI 2.0, HDMI 2.1 handles 1080p, 1440p, and 4K resolutions effortlessly as well as the following:

Support for 10, 12, and 16-bit color is also a feature of HDMI 2.1, making it suitable for 4K and 8K dynamic HDR screens. Depending on the manufacturer’s implementation, HDMI 2.1 can use both compressed and uncompressed data transmission. Backward compatibility is also not an issue when using new cables on old HDMI ports.

Honorable mentions for the HDMI interface range are the mini-HDMI and micro-HDMI, implemented by DSLR cameras and action cameras (i.e., GoPro), respectively.

DisplayPort is a digital display interface developed by the Video Electronics Standards Association (VESA) and released in 2006. Despite DisplayPort being the practical rival to HDMI, it was years before implementation for use in computer monitors took off.

DisplayPort, much like HDMI, is capable of supporting high-resolution digital video along with audio signals. While HDMI is mostly in use for consumer devices such as TVs and multimedia players, the implementation of DisplayPort is primarily in computers.

Until the release of HDMI 2.1, DisplayPort was the first interface to implement the use of DSC in DisplayPort 1.4 in 2016, a full two years before its integration in HDMI. Another difference between DisplayPort and HDMI is the fact that manufacturers need to pay an annual licensing fee for the use of HDMI, not counting a separate licensing fee that manufacturers have to pay to High-bandwidth Digital Content Protection (HDCP).

The release of DisplayPort 1.0 in 2006 and the subsequent releases of DisplayPort 1.1 in 2007 and DisplayPort 1.1a in 2008 was revolutionary. DisplayPort is the first interface to rely on packetized data transmission, which means, unlike that of HDMI that transmits uncompressed video and audio signals, DisplayPort would transmit these signals in small data packets. This feature allowed for supporting high resolutions with the use of fewer pins in the port while having a maximum bandwidth of 10.8Gbps. These are the following resolutions supported by DisplayPort 1.0 to 1.1a:

Comparing the resolutions that earlier DisplayPort versions were able to support against HDMI 1.4 shows that DisplayPort outclassed it. However, it would take a few years before DisplayPort would get implemented outside of use for computers.

Released in 2010, DisplayPort 1.2 made use of more color spaces, i.e., scRGB, xvYCC, and Adobe RGB 1998, which meant that DisplayPort 1.2 is capable of delivering better color depth. Global Time Code (GTC) came with the new version, allowing better synchronization between audio and video signals. With a maximum bandwidth of 21.6Gbps, double than that of the previous versions, DisplayPort 1.2 and 1.2a supported the following resolutions:

Other improvements include Multi-Stream Transport (MST), making connecting to multiple monitors better, stereoscopic 3D facilities, and increased AUX channel bandwidth from 1Mbit/s to 720Mbit/s. The improvement made to DisplayPort 1.2a in 2013 was the introduction of Adaptive-Sync. This feature would synchronize monitor refresh rate with the fps provided by the video card to eliminate tearing, stutter, and input lag. When DisplayPort 1.2 was released, Apple Inc. also introduced the Mini DisplayPort, used in laptops and other small display devices.

Released in 2014, version 1.3 came with the improvements to version 1.2a. The significant difference it has was a higher maximum bandwidth at 32.4Gbps, enabling it to support higher resolutions such as the following:

2016 marked the release of version 1.4. It had the same maximum bandwidth of 32.4Gbps, but it did implement Display Stream Compression (DSC) and HDR. With an impressive encoding compression ratio of 3:1, DSC allowed DisplayPort 1.4 to support the following resolutions:

DisplayPort 2.0 was formally released by VESA in 2019. The first massive update to the DisplayPort interface since 2016, DisplayPort 2.0 features 77.4 Gbps maximum bandwidth that allowed it to support HDR in much higher resolutions, as well as better refresh rates, and monitor resolutions above 8K such as the following:

With DisplayPort 2.0 still being relatively new, monitors and other consumer devices that use its maximum capacities are not yet around. However, the use of multiple 4K monitors/displays is entirely possible, with their refresh rates depending only if the monitors have DSC or not.

There are primarily two monitor ports used today, HDMI and DisplayPort. While VGA and DVI are still in use, they are already outdated when it comes to their output.

VGA and DVI ports are still okay for general or office-use computer monitors, but it would be preferable to avoid VGA altogether since it utilizes an analog signal.

For professional photography, video editing, or gaming use, we recommend DisplayPort over HDMI as it supports better color bit rates, much higher resolutions, and multiple monitors.