Your CPU is at the heart of everything that you do on your computer, so it is imperative to choose a CPU that is best suited for your needs. Read on to learn about the 12 different features of a CPU to help you make your purchase.

Most computer CPUs are manufactured by either Intel or AMD. The mainstream Intel Core family of processors includes the i3, i5, i7, and i9 chips, while AMD Ryzen includes the 3, 5, 7, and 9.

When choosing a CPU, it’s important to take note of individual specs and to also make sure that the other components in your build are compatible.

A processor’s clock speed refers to the number of cycles that are performed every second. For example, a 3.1GHz processor can perform 3.1 billion in one second.

The higher the clock speed, the more tasks the processor can complete, and the faster your computer will generally run.

It’s important to note that it’s not always best to compare processor clock speeds of different generations or manufacturers.

Both AMD and Intel allow select CPUs to operate above their typical frequencies for a temporary performance boost when needed. AMD and Intel call this technology - Turbo Core and Turbo Boost respectively.

For a CPU to ‘turbo-boost’, its clock speed increases. It must be supplied with enough power and be operating within its typical temperature range. For example, the AMD Ryzen 5 3600 has a base clock of 3.6GHz but has a Max Boost Clock of up to 4.2GHz.

Again, this boost is only temporary and the CPU will revert to its typical state to prevent any overheating and damage to the CPU.

Overclocking is the act of increasing the base clock speed that your processor runs at. To do this, you’ll need to ensure that both your CPU and motherboard support overclocking.

All AMD Ryzen processors support overclocking, while Intel usually reserves that feature for their higher-end processors. Intel Core processor models that end with a ‘K’ or ‘X’ can usually be overclocked, e.g., the Intel Core i5-10600K.

If you plan on overclocking your CPU, you’ll need to have a sufficient cooling solution as an overclocked chip will use more power and therefore generate more heat.

Most, if not all, processors today feature multiple ‘cores’. A core is essentially a microprocessor within the CPU.

Without considering hyper-threading or multi-threading, a processor can technically work on only one ‘task’ at a time. Now, because modern processors are so fast, we as users don't notice the processor dividing its time between different processes as we multitask on our computers.

The more cores a processor has, the faster it can handle multiple processes, which is important for multitasking or for heavy workloads that can take advantage of multiple cores.

For basic users, an efficient dual-core processor will be sufficient, but for enthusiasts or power users, a quad-core or higher is recommended.

Please note, that for gamers, a higher clock speed may be more important than having extra cores, e.g., quad-core vs 6-core. Many current games are not designed to take advantage of more than a couple of cores, but this is slowly changing.

Below is a list of processor families by core count:

Intel CPUs use ‘hyper-threading’ and AMD CPUs use ‘simultaneous multi-threading’ or SMT to achieve this, with both technologies essentially being the same.

As mentioned earlier, more cores and threads equal better efficiency and multitasking as the processor is better able to divide its processing power among different tasks.

Most CPUs have 3 “L” caches to store data needed to perform tasks. These are named L1, L2, and L3, with the capacity increasing with each level. If the data the processor needs can’t be found in the L1 cache, it ‘seeks’ this data from the L2 cache and so on.

Because these caches are built into the processor itself, they are the fastest places a processor can access data, starting with the L1 cache.

While each core has its own L1 cache, the L2 cache can be exclusive or shared, with the L3 cache shared by each of the cores.

As cache capacity increases, it takes longer for a processor to search for needed data, which is why L caches are relatively much smaller in capacity than RAM.

A typical L1 cache can be up to 256 KB, while an L2 cache can typically range anywhere from 256KB to 8MB of capacity.

When choosing a processor, it’s typically unnecessary to worry about L cache sizes as manufacturers will have them optimized for each processor.

DDR4, which stands for ‘Double Data Rate’ is the latest variant of random access memory, which all modern CPUs support. The RAM of your computer stores the data that your CPU needs to run your applications.

There are a couple of memory specifications to consider when choosing a CPU:

The memory speed, measured in MHz, determines the speed that data transfer occurs with higher numbers being faster. RAM, that is rated at 3000 MHz, means that it performs 3000 million cycles per second, or 3 billion cycles a second.

The current AMD Ryzen generation of processors support DDR4 memory at up to 3200 MHz speeds.

You can think of a channel as a ‘lane’ of communication between the processor and memory. The more lanes, the faster the data exchange can be.

To take advantage of dual-channel memory, install two RAM modules of the same type into the two DIMM slots indicated by your motherboard manual.

CAS latency or CL, which is measured in nanoseconds refers to the delay in between the request for data in the RAM and when it is available.

DDR4 memory modules usually have a CAS latency of at least 15, with lower ratings being better.

In the case of two RAM modules having the same speed but different CL latencies, the module with the lower CL will perform better.

TDP stands for Thermal Design Power, and measures in watts, the amount of heat that a CPU will generate under load. While similar, TDP is not the same thing as power consumption and is still helpful when choosing the right power supply, as well as the cooling system.

It’s important to have a power supply that can handle the TDP a CPU is rated for, in addition to the other components in a build like the GPU. More powerful components consume more energy and therefore generate more heat requiring more advanced cooling solutions.

A modern-day CPU is made up of billions of transistors. The manufacturing process which is measured in nm (nanometers) refers to the semiconductor fabrication technology used to manufacture a CPU.

Please note that the measurement in nanometers, e.g., 7nm, does not actually represent the size of the transistors and is more of a commercial term. Additionally, Intel’s 10nm process transistor density is reportedly similar to AMD’s 7nm process.

Smaller more energy-efficient transistors mean more can fit in the same space, resulting in more powerful energy-efficient CPUs. While this spec can give you an idea of how advanced a chip is, it’s not an accurate measure of performance. More important specs to consider would be clock speed and core count.

The micro-architecture is the layout structure of electronic components on the processor chip. Every newer architecture is supposed to be better and efficient than its predecessors.

For example the latest 5000 series AMD processors are based on Zen 3 Architecture.

Both AMD and Intel have various micro-architectures used in their cpus.
Check out the wikipedia link to learn more.

Usually its a better idea to go with newer generation cpus. But at the same time, older generations cpus might be available at cheaper prices, which may offer a better performance to price ratio sometimes.

A CPU socket is a physical interface on a motherboard in which a processor is placed to connect to the other components of a computer. AMD and Intel processors both support their own specific socket types. 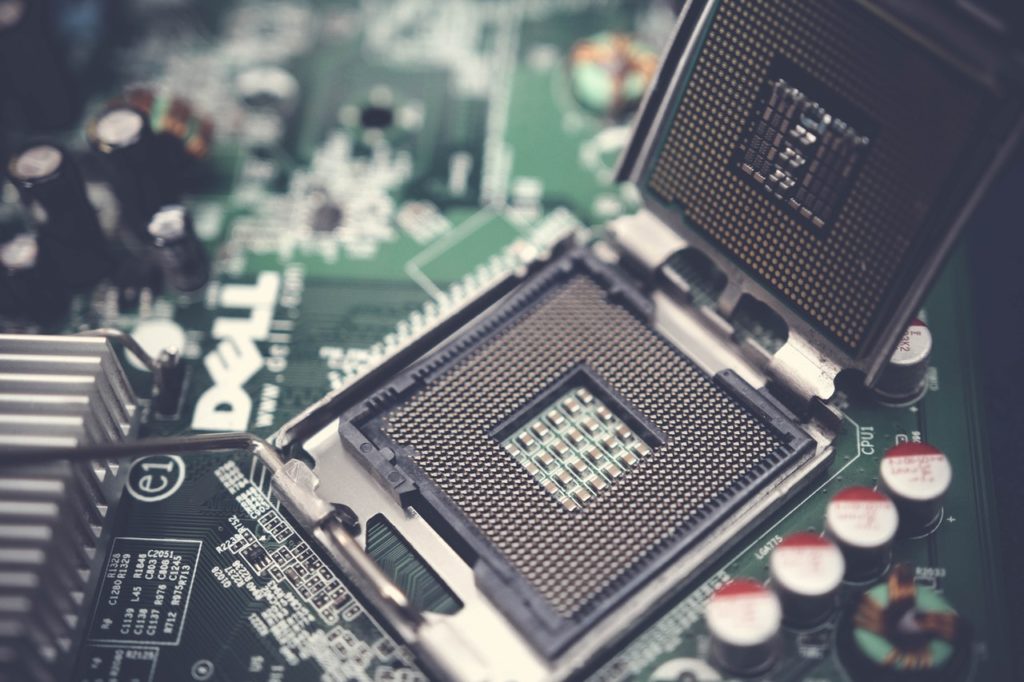 The socket type determines the number of pins used and their physical configuration, so it’s important to make sure your motherboard and processor are compatible. Keep in mind that two different processors could share the same socket type but will not be compatible with the same motherboard. This is due to a different chipset being used (more on this below).

Having a backward-compatible socket is useful if you plan on upgrading your processor later on. AMD has the best backward compatibility with their AM4 socket that supports older processors, while Intel has a couple of different versions that are still current today.

The chipset of a motherboard handles the data flow between the components of your computer. It determines how fast your computer’s components communicate with each other, whether or not you can overclock your CPU, the speed of your RAM, and how many USB connections you can have.

A PC’s components communicate with each other using PCIe® lanes, and more lanes equal faster data transfer. A PCIe lane can be considered as the physical wires on a motherboard that connect components.

A more budget-friendly chipset like AMD’s B450 comes with 36 PCIe® 3 Lanes, whereas the more advanced and expensive chipset, X570 comes with 44 PCIe® 4 Lanes.

Many CPUs come with integrated graphics on the chip itself, meaning you don’t need a dedicated GPU to drive your monitor. While an integrated graphics solution is a solid option for casual users, some users add a discrete graphics card to their system for added graphical performance.

Integrated graphics can also be helpful when troubleshooting a discrete graphics card as you can still display an image on your monitor even if your discrete GPU is malfunctioning.

Intel offers Intel HD Graphics, Intel UHD Graphics, and Intel Iris in selected CPUs while AMD offers Radeon Vega graphics. For those who are doing advanced photo/video editing or high-end gaming, it's best to have a dedicated graphics card.

It’s important when choosing a CPU to consider a CPU as a whole instead of focusing on just one feature or specification.

Even though the Ryzen 5 CPU has a higher clock speed, the Ryzen 7 will typically outperform it in most cases since it has more cores.

It’s common to first choose a CPU that is best for your intended use and budget, and then choose other compatible components based on that CPU.