Motherboard is perhaps the most important component of a PC that connects all components together.

All the pc parts like CPU, RAM, Graphics Card, SSDs, Optical drives, usb drives, monitor, keyboard, mouse connect and communicate via the motherboard. The motherboard is the foundation of your PC and it determines what other components you can install in your PC.

Like with any component the motherboard also has a lot of technical specifications that the end user needs to understand in order to select the right one for his needs.

There is no single metric that indicates the performance of a motherboard. A motherboard actually implements numerous technologies and standards like SATA, PCIE, USB, Ethernet etc, each of which have their own technical specifications.

The motherboard determines what CPU you can use and how fast and efficiently all the components shall work.

In this post we shall take a quick look at some of the most important features and specifications of motherboards. Here is a quick list:

Motherboards come in 3 popular sizes - ATX, micro-ATX (mATX), and mini-ITX (ITX). The main difference between the three form factors is their sizes and the number of interfaces (like RAM slots, PCIE slots, USB slots) available on them to connect various other hardware components.

There is an even larger form factor known as E-ATX or Extended ATX but it is not that popular in the consumer PC market segment.

ATX is the biggest among the three and generally only fit in full tower cases. The physical dimensions of ATX are 12 in. x 9.6 in.

Being the biggest, ATX motherboards have more space for slots. It comes with 4 or more RAM slots, 4 or more PCI-E and PCI slots, and 6 or more SATA ports.

If you are building a high productivity machine which needs to access lots of peripherals like storage devices, graphics cards, usb drives etc, then ATX motherboards are the high end choice.

These motherboards are larger in size, and most expensive ones. Also bear in mind that larger motherboards will need a compatible cases that can accommodate them.

mATX is the middle ground. It's smaller than ATX but is still larger than ITX boards. It’s also usually cheaper than both ATX motherboards, so it's a good place to start for new PC builders or budget builders.

Micro-ATX is the most popular choice for standard pc builds as they support an adequate number of devices. Whether you are building a gaming pc or a video editing pc, or a simple home pc, micro-atx works just fine in all cases.

Micro-atx comes in various sizes. Some are compact with only 2 RAM slots while others are bigger with 4 RAM slots.

ITX motherboards are usually boards for enthusiasts who are trying to build the smallest possible PC they can. The obvious advantage of ITX boards is that they can fit in very small PC cases, making them great for mobile workstations. ITX motherboards only have minimal slots and ports.

The CPU socket and chipset are the most important thing that you should consider when choosing your motherboard. The socket determines what CPU you can install onto the motherboard.

The main sockets for AMD Ryzen series processors include AM3 and AM4. With AMD there are only few socket types to use and they are often backward compatible with previous generation processors. This makes it easy to upgrade your CPU without having to upgrade your motherboard everytime.

The main sockets for Intel processors include LGA775, LGA1151, LGA1200. It should be noted that Intel has far more socket types for its processors. Due to this intel socket based motherboards often run into compatibility with future versions of intel processors. Users have to buy a new motherboard for a new cpu if they wish to upgrade.

Besides the socket, the chipset is the next important thing that determines what processor can be installed on a motherboard. Any processor is only compatible with a limited set of chipsets.

The chipset is the main chip on the motherboard that enables the cpu and peripherals to communicate with each other. So the chipset determines how fast and efficiently various components can exchange data.

A chipset that supports PCIE4 will allow for faster communication between the pcie peripherals and cpu for instance.

Newer generation AMD processors have been on the same AM4 socket for years now, and that’s great for upgrading in the years to come, especially since most of their motherboard chipsets still support newer processors.

For some chipsets, all you need to do is update your bios and pop in the new processor.

Some AMD chipsets also allow you to overclock unlocked processors and overclock the RAM frequencies as well. So, make sure to keep that in mind when choosing your motherboard.

At the time of writing this article, the X570 is the most powerful chipset with full support for PCIE 4.0 and the latest Ryzen 3 series of AMD processors.

Unlike AMD’s Ryzen processors, Intel usually changes sockets almost every generation, making it harder and more expensive to upgrade to the next generation since you need to buy a whole new motherboard to support new processors.

Motherboards will often have multiple different versions of USB ports available on them. USB ports are present on the backside IO panel and also onboard as header pins. The header pins connect to the front usb ports on the pc case via cables. 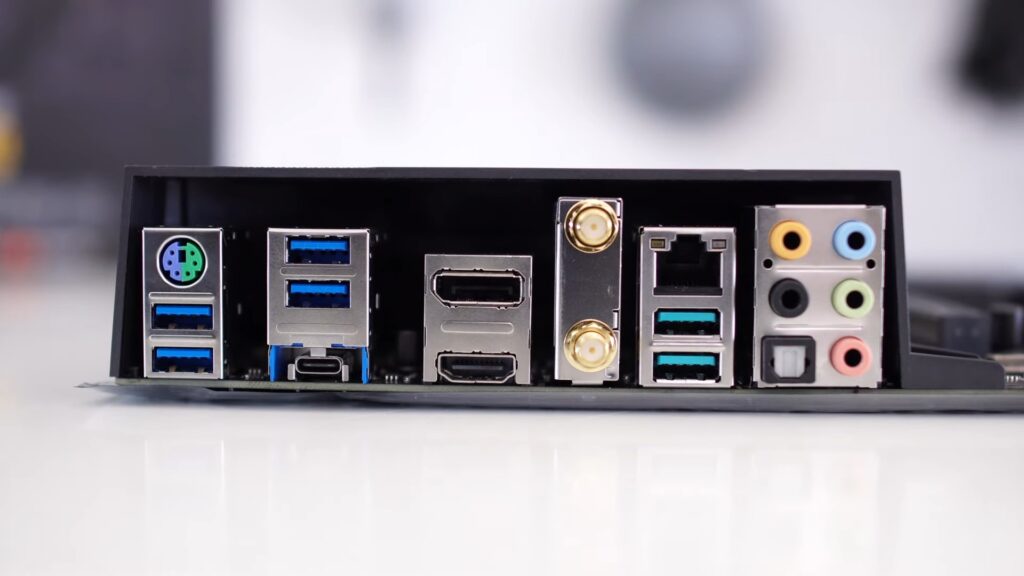 The USB standard has gone several upgrades all the way from USB 2.0 to USB 3.2 Gen2 with increasing speeds.
USB 3.0 offers up to 10 times faster transfer speeds than USB 2.0, so be on the lookout for the number of USB 3.0 and 2.0 ports on your motherboard.

The latest version is USB 3.2 Gen 2x2 which offer speeds upto 20 Gigabits/s. Motherboards can have both USB 3.2 Gen 1 and Gen 2 ports depending on form factor and chipset.

To learn more about the USB standard and different versions check the wikipedia article here
https://en.wikipedia.org/wiki/USB_3.0

The number of USB ports and the maximum supported speed actually depends on the the CPU and Chipset both. Newer chipsets like X570 have full PCIE 4.0 support and multiple lanes for USB data transfer and can support far more USB ports than other older chipsets.

Another important thing that affects the number of USB ports is the motherboard form factor. Compact sized micro-atx motherboards will have fewer usb ports than ATX motherboards.

RAM Slots (also known as DIMM slots) will determine the type and capacity of RAM your motherboard supports. Motherboards usually support only a specific version of DIMM like DDR3 or DDR4 and then is a maximum upper limit to the amount of RAM that can be installed.

RAM nowadays is mostly either DDR3 or DDR4, unless you have a very outdated system. Most newer generation processors only support DDR4, so make sure that the motherboard supports it as well.

Make sure to check up to what RAM speeds the motherboard supports before buying a high-frequency RAM kit. Take some time to think about the number of RAM slots as well as the maximum supported RAM which varies from motherboard to motherboard.

There are several different video ports available on motherboards, such as HDMI, DP, DVI, and VGA. These ports are used to access the on-board graphics of your processor.

Most modern motherboards have both HDMI and DisplayPort interfaces together. If you have a monitor that has VGA port then us a convertor adaptor.

The Video Graphics Array or VGA port is one of the oldest video ports, still used in the market today. It makes use of analog signals making it prone to signal degradation, but older devices are guaranteed to work with it.

It is slowly being phased out and is not available on newer motherboards.

Digital Visual Interference or DVI provides a better image than VGA and is more versatile due to its capability of both analog and digital signals. However, much like VGA, it is rarely used nowadays.

High Definition Multimedia Interference or HDMI provides better color and image than the older connectors. It can also support audio, making it one of the mainstream connectors today. Any new device will almost certainly have at least one HDMI port.

This is the most popular video connector and is available on all recent motherboards.

DisplayPort or DP is a graphics port that is usually found on high refresh rate monitors. The main advantage of DP over HDMI is that it can support up to 8K resolution, multiple video streams, and high refresh rate at high resolutions, that helps eliminate lag and screen tearing. 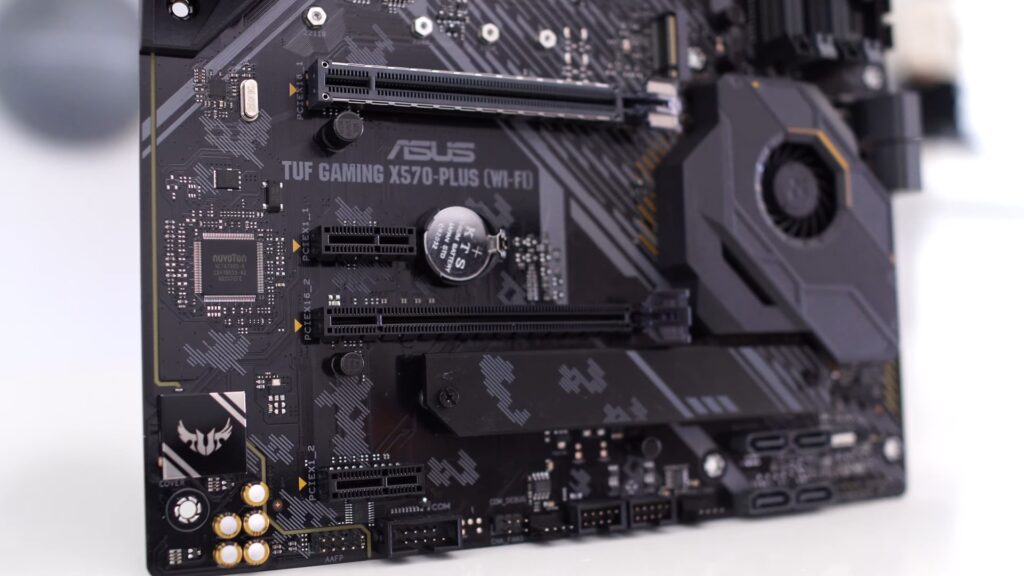 Built-in Wi-Fi is becoming a common feature on desktop motherboards. These motherboards are targeted towards the gaming users who need fast connectivity without having to depend on wires. 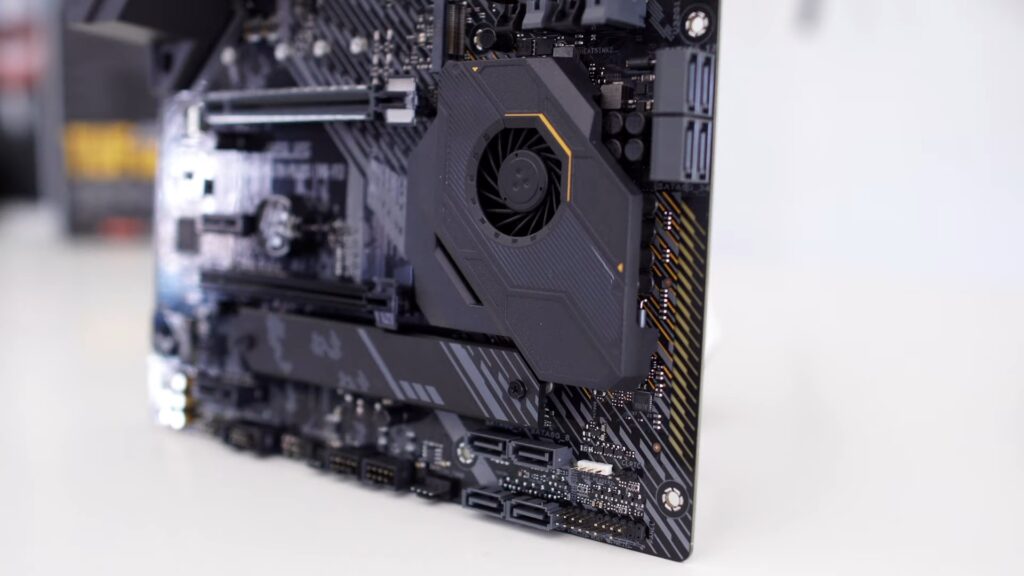 For storage drive the M.2 NVME technology far superior to SATA. Though you may use SATA ports to add additional hard drives for more space.
To learn more about the SATA technology check the wikipedia article here:

M.2 is a different type of SSD that makes use of PCI-E standard to provide support for faster transfer speeds over the traditional 2.5" SSD.

Generally speaking, using faster storage not only allows your PC to boot-up, copy items, and open applications faster, but it also makes your system respond quicker and snappier in general.

If you want the best and the fastest, make sure to grab a motherboard with M.2 NVMe support.

RGB headers on the motherboard is a must for users who like bright and flashy lights in their PC.

That was a brief overview of various motherboard specifications and features. If you are planning to buy a new motherboard for a new PC or upgrading your existing one then make sure to carefully go through the specification list and choose a motherboard that has all the necessary features and also will support future hardware upgrades.