So for this you are going to need your windows 8 iso along with the latest version of Virtualbox ( 4.2.6 currently ) installed on your host system.

Also make sure that you have plenty of RAM and hard disk space along with cpu cores to do this. We are going to give windows around 2GB of ram along with 25gb of disk space for the installation. So make sure you have enough hardware resources.

If its all ready, then lets begin.

Launch Virtualbox and create a New virtualdevice with the following configurations.

I preferred creating a Fixed size disk. Dynamically sized disk would create a small sized initial disk but would keep expanding the size during the installation of windows, making the install process slower. Instead having a fixed size disk would take some time to create, but the processes later on go fine.

Start the virtual drive and give it the windows 8 iso

Once the device is ready, start it from virtualbox manager window. It will popup a dialog asking for the windows disk/iso. Select your iso and start the boot process.

Look out for a big button named "Desktop" click it would take to the old desktop.

After the windows installation process completes and it boots to the Start page, the next important thing to do is to install the guest additions for better performance like proper screen resolution, copy pasting across guest and host etc.

To install the guest additions simple click Devices > Install Guest Additions in the virtualbox window. Then click on Desktop image in the Start page. It will bring up the traditional desktop like earlier windows versions. Next click the File Exporer icon in the taskbar which will open up something like My Computer. Now navigate to the cd/dvd drive which will have the guest addition cd mounted. Click the windows installer and proceed with installation of the guest additions.

Once the guest additions installation is over, restart windows. Now when it starts the screen resolution etc should all look correct.

By default windows 8 might not detect network support inside virtualbox. It is simply fixed by changing the network settings in virtualbox. Shutdown windows and close the virtual image. Then in virtualbox manager window, right click the windows 8 virtual disk and go to settings. Then navigate to the Network tab and make settings as follows

Here is a screenshot 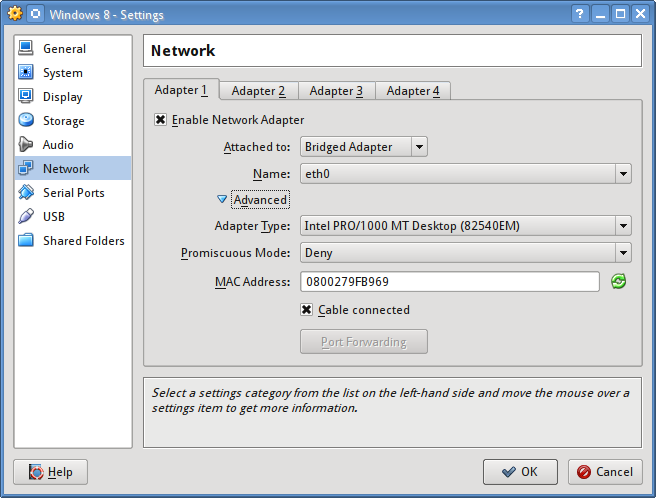 Save the settings and start the windows machine. Now windows should be able to detect the network device and would assign an ip address if dhcp is enabled in a local router at 192.168.1.1 , or otherwise the ip address has to be configured manually which can be done in the control panel.