The Gnome Flashback desktop environment is a simple and great way to get back the old style classical desktop if you do not like Unity desktop, like many.

Gnome Flashback is based on GTK 3 and provides a desktop interface visually similar to the old gnome desktop.

Another alternative to gnome flashback is the MATE desktop from linux mint and XFCE desktop, but both of them are based on gtk 2.

Install the following package on your Ubuntu system and you are done.

Metacity is lighter and faster, whereas Compiz gets you the more fancy desktop effects. Here is a screenshot of my gnome flashback desktop.

It uses a wallpaper from elementary OS and also Plank dock with no bottom panel. This tutorial explains every bit of it. 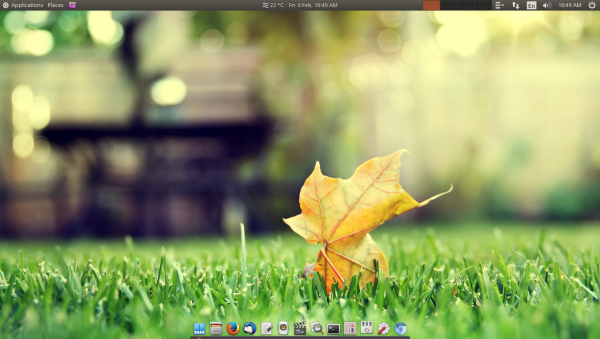 After installing Gnome Flashback desktop you need to do a couple of more things to finetune it.

The Gnome Tweak Tool allows you to customize things like fonts, themes etc, that are otherwise difficult or impossible with the "unity-control-center" tool of Unity desktop.

By default right clicking on the panels would not have any effect.

You can modify the panel, remove it and also add applets to it. In this example we shall remove the bottom panel and replace it with Plank dock.

Add a datetime applet on the top panel at the middle. Configure it to display the date time and weather conditions.

Also add a workspace switcher applet to the top panel and create as many workspaces as you need.

On Ubuntu the minimise, maximise and close buttons on the window title bar are on the left by default. It needs a small hack to get them to the right.

To take the window buttons to the right use the following command, which I found at askubuntu.

The same can be done from dconf-editor too.

The plank dock sits at the bottom and holds launchers for applications and window launchers for running applications. It hides itself when not necessary and shows up again when needed. Its the same dock as used by elementary OS.

Find it in Applications > Accessories > Plank. To configure it to start automatically with the system, go to System Tools > Preferences > Startup Applications and add the "plank" command to the list.

Conky is a nice way to decorate your desktop with system statistics like cpu and memory usage. It is lightweight and works most of the time without any hassles.

Now launch Applications > Accessories > Conky Manager and select the widget you want to display on your desktop. Conky Manager also allows you to configure it to launch at system startup.

If you wish to use Gnome Flashback (Compiz) session then it would be useful to use the compiz settings manager to configure desktop effects. Install it with the following command

However the Compiz session is slower than the Metacity session.

On Ubuntu with unity installed, the scrollbars are the overlay scrollbars. In order to revert to the old style plain scrollbar, run the following command

Or run dconf-editor and go to com > canonical > desktop > interface and set the scrollbar-mode value to normal.

By default, the gnome flashback session does not show icons in dropdown menus and buttons. To enable these run the following commands

Or do the settings from dconf-editor.

If your system is on low hardware and you need to maximise speed, then it might be a good idea to keep them disabled.

10. Disable compositing in metacity to speed up

If your system is low on hardware and you need to speed up things, then use the metacity desktop and disable compositing. Doing so would remove the desktop effects like shadows etc.

Open dconf-editor and go to the following path.

Find the setting called compositing-manager and uncheck it. It would take effect instantly and windows would lose their shadows. But it would also speed up the desktop user interface.

Find another setting called 'edge-tiling' and uncheck it to speed up window dragging.

The default available themes are Ambiance and Adwaita that might not appeal to everyone. The shimmer project has 2 nice themes called bluebird and greybird. Install them

Now open gnome-tweak-tool and in the Appearance tab, select Theme > Window > Bluebird. Its a blue colored window border theme. Bluebird as the window theme goes well with Ambiance as the GTK theme.