I recently installed Conky on Linux Mint 17 Cinnamon and chose the Gotham theme widgets to display on the desktop. However the next minute I noticed, that on going to the desktop by clicking the show desktop applet on the panel, made the conky widgets disappear.

I checked all configurations in Conky Manager and tried to find any relevant option to control this behaviour but there was none. Then looked up google and came across many forum posts discussing the same issue. It had to do with the conky configuration file.

However it was a bit tricky to find and fix the right configuration file. Most of the forums posts and blogs talk about editing the ~/.conkyrc file which might not exist on your system. Some mention about editing the /etc/conky/conky.conf file which will have no effect.

The correct configuration file lies in the theme directory inside the directory named conky-manager in the home directory.

I am using the Gotham theme, so the configuration file to edit is

Find out the section for own_window settings. It should look something like this.

Change the value of own_window_type to desktop 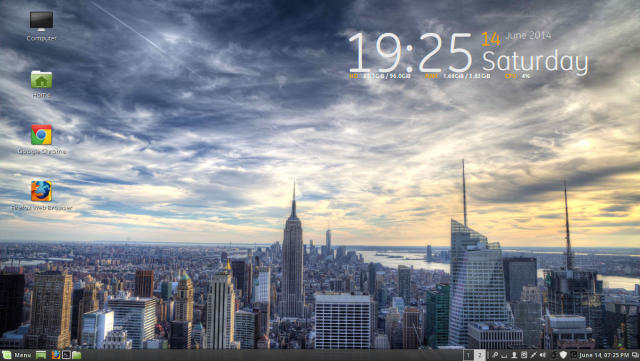 After changing the window type to desktop you shall have to change the values of horizontal and vertical gaps to fit the widget in the proper place on the screen. This can be done directly inside the configuration file by changing the values of following 2 fields

Keep changing the values till you find the widget in the right place.