Computer gaming has always been popular, but with streaming and Esports becoming bigger than ever, more people are getting into it. PC gaming requires having the right hardware, from the hardware in your desktop or laptop, to the keyboard and mouse you use.

Depending on the genre you play the most, the mouse can easily be the most important part of your gaming experience.

In first-person shooters, in particular, your mouse has the potential to completely throw off your opponent. You need a mouse that responds exactly how you want it to, which is what a gaming mouse is for.

A gaming mouse brings so much versatility that not having one is a clear disadvantage for a gamer. With the ability to change sensitivity, the option for hotkeys on the extra buttons, and precise motion, it’s best to get a gaming mouse if you’re a hardcore gamer, or even one just starting. 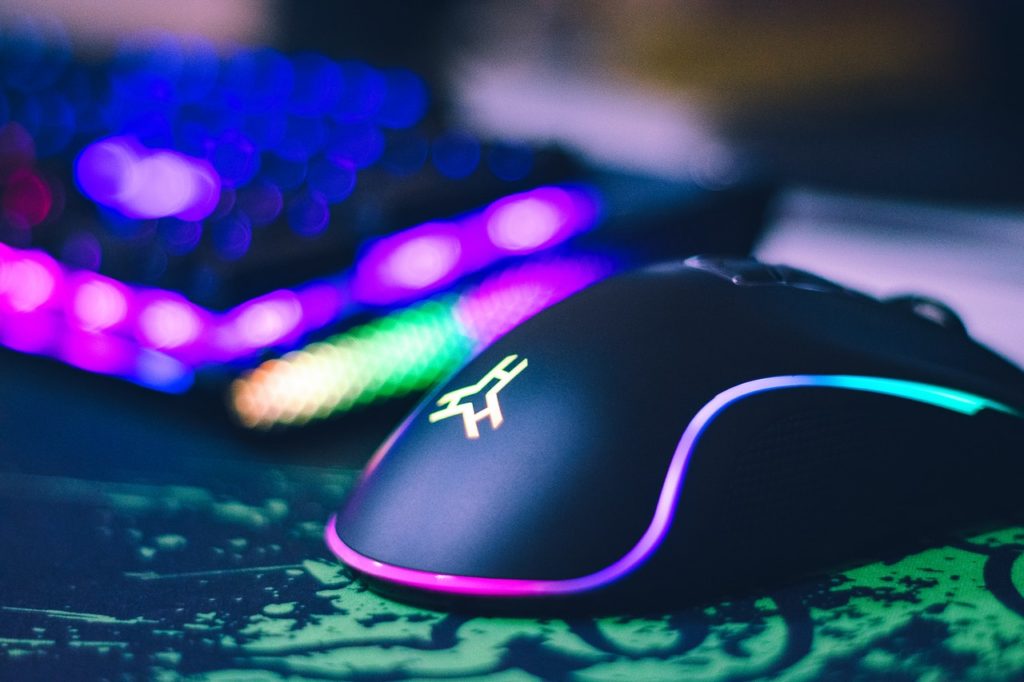 Looking through gaming mouse options, you may come across many terms that are unfamiliar to you when going through spec lists. We’re here to educate you on these technical features so that you can buy the perfect gaming mouse confidently.

A sensor is likely the most integral part of a mouse as, without it, the mouse cannot function. A sensor is responsible for tracking the motion of the mouse across a surface and translating that to the movement of the cursor or crosshair on the computer screen.

There are two main types of sensors - laser sensors and optical sensors. In the past, a computer mouse used a rubber ball to move rollers which detected motion, but these days, that is outdated technology.

An optical sensor uses an LED to illuminate the surface the mouse is moving on. By doing this, the light from the LED is essentially bounced off the surface and read by a complementary metal-oxide-semiconductor or CMOS sensor in the mouse.

This essentially functions as a camera does. The CMOS sensor receives an image of the surface it was moved over, and it receives these images thousands of times each second.

By comparing these images, it can form a film reel of a sort, allowing the mouse to determine which direction you moved it in. One problem with an optical mouse is its performance over different surfaces. Because it is essentially taking photographs, clear or reflective surfaces like glass may prevent the mouse from working as intended.

However, improvements to the technology have made it possible to use optical mice on difficult surfaces with a greater degree of success.

A laser sensor, as the name states, uses a small infrared laser which shoots downwards multiple times per second. This laser hits the surface it’s on, illuminating it, and bounces back with the light of the surface it hit.

This light gets to the CMOS sensor, essentially forming a picture. The changes between the multiple images are compared to calculate the perceived moment. A laser can penetrate irregular surfaces like glass much better than an optical mouse.

This advantage also presents its downside. Due to the manner with which a laser mouse works, it is more likely to pick up accidental motions and jitter. Fibers or even dust on a surface can cause unwanted behavior.

DPI stands for Dots per Inch, and CPI for Counts per Inch. They essentially mean the same thing. This is basically the unit for measuring the sensitivity of a mouse, or how much your cursor moves after moving your mouse an inch.

A higher DPI means the mouse is more sensitive and a slight movement will translate to a lot of movement on the screen. A lower DPI is less sensitive and allows for more precise targeting, as small movements of the mouse will barely register.

A good gaming mouse will have a DPI or CPI button. This allows you to toggle through different DPI levels to adjust sensitivity on the fly. This way, you can get the precision required for a long-range headshot, and quickly switch to the sensitivity required for quick reflex no-scoping.

The resolution of your display has some impact on how your DPI translates to movement. At the same DPI, a mouse moved an inch will move further on a Full HD screen when compared to a 4K one. It’s simply because a higher resolution means more ‘dots’ to traverse.

So while they moved over the same number of dots per inch, one has more dots comprising its length than the other, so appears to cover less distance. A good gaming mouse will have a large enough DPI range to not really make this a problem.

Similar to an election or a poll, a mouse has to report its numbers containing its position back to the computer. It has to do this a consistent number of times each second, and this rate is what is known as the polling rate.

A 1000 Hz polling rate means that your mouse is reporting its position to your computer 1000 times a second, and 60,000 times in a minute. Having the mouse report its position so many times can be cpu intensive.

A higher polling rate can cause a lag on your system if your CPU isn't fast enough to handle the frequent updating. In cases like this, turn down your polling rate, as lag caused by your gaming mouse can slow down your game play.

Also known as the perfect control speed, or measured in inches per second, this refers to how fast the mouse can be moved while maintaining accurate tracking of its motion.

Being tailored for gamers, gaming mice go with that aesthetic that many gaming products have settled for. They are edgy and aggressive a lot of the time and come with RGB lighting to fit with the rest of the gaming setup. Build tends to be a bonus purely for aesthetic value for other hardware, but for a gaming mouse that you’ll be holding for hours, it matters immensely.

The material of choice for gaming mice is plastic. It’s light, cheaper to manufacture, and can be textured or given a finish that makes it easy to grip.

Sweaty palms are a concern when gaming, so a mouse that can be gripped easily and won’t slip in your hands is important. Some gaming mice have rubber or silicone pads at certain parts to improve grip.

The build of the mouse is also essential because different people have different hand sizes. Some mice are large, and some are small. It’s important to choose one that aligns well with your hand size.

A gaming mouse can also be ambidextrous, or ergonomic. An ambidextrous mouse is built to be used easily regardless of which hand is your dominant one. Ergonomic mice are built with a right hand in mind and are shaped to conveniently accommodate one. A left-handed person will have difficulties using a typical ergonomic mouse.

There are different grips, and while the grips are more a matter of personal preference, the profile of same gaming mice are more suited to one type of grip over another:

The palm grip can be considered the default grip for a gaming mouse. When you use a regular desktop mouse for menial tasks, you hold it snugly, allowing your palm to conform to it, and letting your fingers rest with the joints straight. This is the palm grip.
Mice with a high profile are well suited for this, as they are able to arch nicely in your hand and provide good support.

The claw grip starts off like the palm grip, with the only difference being how the fingers that rest on most buttons are now arched upwards, like a claw. This allows for quicker reaction times for button actions. An ergonomic mouse that’s medium or high will be perfect.

While there are options for wireless gaming mice, the gold standard for serious gamers is wired mice. This simply comes down to the fact that wires transmit signals much faster than wireless so latency is minimum.

A wireless mouse will introduce latency, which is something that can't be forgiven in intense, rapidly moving games like first person shooters.

It’s important to pay attention to the wire on a wired mouse. You don’t want one that’s too thick, as it will likely be less flexible. You also don’t want one that looks so thin as to be flimsy. If you decide to opt for a wireless mouse, remember that it will need batteries.

There's not a gaming mouse we can name that won’t come with a standard three buttons – left, right, and scroll click. In addition to these, a lot of gaming mice come with extra buttons on the side, particularly where the thumb can access them.

This can range from a simple 2 buttons to up to 12 arranged like a number pad.

Extra buttons can be mapped to keyboard functions to serve as hotkeys. You can focus on moving your character in an FPS when your mouse can handle swapping weapons, tossing grenades, and pretty much anything else that can be mapped.

Generally, most people prefer lighter mice. However, those who have a perfect sweet spot or wish the mouse they bought was a bit heftier would benefit from gaming mice with additional weights. Some mice come with little tablet-shaped weights that can be added or removed as required to change the mass of the mouse.

Classifying Gaming Mice Based on Weight:

RGB is a fancy but high demand feature in all gaming accessories and components. Components have led lights built into the body in various places in different shapes and sizes that glow with different colors and effects to give a really attractive and aesthetic look to the entire system.

Most gaming mice have rgb lighting and these lights can produce upto 16 million colors. Along with programmable effects the color variation can create a really nice looking appealing visual, that owners appreciate.

The only thing that differs is the shape and location of the lights. Different mice have leds positioned differently. So look for the one that you find most attractive.

Lift-off distance (LOD) refers to how far you can lift a mouse off a surface and still have the sensor register motion.

A lift-off distance that’s too high can cause a lot of frustration, as attempts to reposition the mouse can cause unwanted movement of the cursor or crosshair. There’s essentially no reason to desire a high LOD.

Angle snapping can be very polarizing. It refers to software corrections made by your mouse to minor jitters or motions. This aims to produce straight lines when the software believes that is what you intended. Small deviations in the line will be ignored, and instead kept straight.

In some instances, it can be appreciated, such as scoping an enemy moving in a straight line. However, it will blur out any intentional small motions, which can be frustrating.

Many professional gamers prefer angle snapping off, as they can trust their raw input without any unwanted adjustments.

With the knowledge of the games you’ll be using your mouse for, and this article, you should be able to confidently purchase a great gaming mouse for yourself. Go ahead and dominate online.