Netgear has a whole line of tri-band routers that offer great performance and stability. A tri-band router, essentially, provides access to three network bands under the same Wi-Fi name.

A network band refers to the range of frequencies that routers and other devices use to transmit data.

In the case of tri-band routers, they appear in the form of a single 2.4GHz band and two 5GHz bands.

The 2.4GHz band has a greater reach, the 5GHz bands are much faster, and suffer very little interference from other wireless signals.

A tri-band router will determine the needs of new connecting devices and assign them to the appropriate band. This prevents single devices from hogging all bandwidth at the expense of others.

With faster performance and larger capacities, tri-band routers are the ideal kind for networks with a lot of traffic.

Our Top Picks for the Best Netgear Tri-Band Routers

Below are some of our top picks for netgear triband routers.

To maximize performance, this router has six antennas and can deliver speeds of up to 3.2Gb/s over three bands.

Furthermore, you get wide network coverage of up to 3500 square feet and access to Netgear Armor security which protects devices connected to the network.

The external antennas work together to transmit three Wi-Fi bands, with speeds of 600Gb/s for the 2.4GHz band and 1.3Gb/s for each of the two 5GHz bands.

The device keeps up-to-date with automatic firmware updates to improve security and stability. Furthermore, it uses Netgear Armor which offers security from malware and other internet attacks.

With the Nighthawk app, you can set up the router with a few simple steps as well as implement parental control features on the Circle app to protect young ones on the internet.

At the back are four 1Gb/s ethernet ports for wired LAN connections as well as a single WAN port that connects to the internet. There are also two USB ports for connecting to storage devices and printers over the network.

This is a step-up from the X6. It delivers speeds of up to 4Gb/s, allowing you to do more without interference. It has 6 antennas and covers a range of up to 3500 square feet. In addition to that, you get Netgear Armor protection, powered by Bitdefender, to secure your network from malware and other threats.

With 6 antennas and a speed of up to 4Gb/s, this router aims to improve networking performance. It supports Beamforming for more effective wireless communication and can support up to 55 simultaneously connected devices, which is ideal for homes with many smart devices.

The device has 4 Ethernet LAN ports for wired networking, in addition to two USB ports that can be used with storage devices or printers over the network.

The device uses Netgear Armor, a security system powered by Bitdefender to ensure the home network is free from cyber-invasion, and it implements secure connections using WPA 2. There's also the possibility to set up separate guest networks for visitors and implement parental controls.

The system runs on a dual-core processor with a speed of 1.8GHz and supports three Wi-Fi bands with speeds of 750Mb/s on the 2.4Ghz band and 1625Mb/s for each of the two 5GHz bands. Devices connect to either band depending on their needs.

This Wi-FI 6 router has the capacity for speeds of up to 10.8Gb/s, allowing you to do everything from having devices that are streaming, gaming, and working simultaneously connected without suffering network downtimes. It is easy to set up via the Nighthawk app and can be managed from the same. 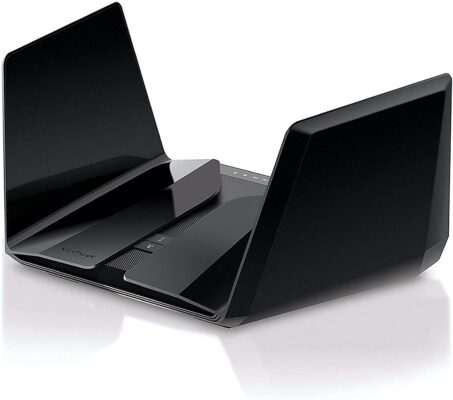 Inside this “winged" router are 8 powerful antennas that deliver high-speed Wi-Fi to an area of up to 2500 square feet. The router has a maximum speed of 10.8Gb/s and runs on three Wi-Fi bands to deliver this.

The router has a quad-core processor with a speed of 1.8GHz. This ensures that the router operates at peak performance, delivering data to devices that need it promptly. It also uses Beamforming technology to ensure efficient packet delivery to specific devices.

Wi-Fi 6 enhances security with the help of WPA3. This secures the home network from Wi-Fi password hacking, and when you do have guests, you can configure a separate guest network from the Nighthawk app or a web portal.

There are 5 LAN ports, one of which is a Multi-Gig Ethernet port, and a WAN port that connects to the internet. 2 USB 3.0 ports are also available for file sharing.

The Orbi Pro (SRR60) is a mesh Wi-Fi system, meaning you get a base router that can connect to several other satellite devices, thus extending the range of your WIFI network. This allows you to scale up your Wi-Fi when demands arise.

This router is ideal for businesses as it comes with three pre-defined networks, one for the admin, one for staff, and one for guests. The guest network allows you to configure a portal that includes a branded splash screen to communicate your business identity.

Since it is configurable as a mesh system, the base router can be connected to satellite devices, essentially extending the range of the wireless network to cover the entire premises.

To ensure high performance, one of the three Wi-Fi bands is reserved for inter-device communication between the base router and the satellites.

This device can deliver speeds of up to 3Gb/s. It also has three LAN ethernet ports for wired connections to devices like printers or computers.

Network setup and management can be done from anywhere using the Netgear Insights app. The app also lets you test the network's performance.

The device can be mounted on walls or ceilings or just placed on a flat surface, depending on your needs. It provides high security and stable connections with the help of MU-MIMO technology.

Up to 55 devices can connect to this router and access the internet reliably, thanks to its high speed and capacity. It's built with 6 external antennas that support MU-MIMO for faster networking as well as advanced security features to keep the network free of malicious access.

The device supports speeds of up to 3.6Gb/s and has four Gigabit Ethernet LAN ports as well as a single WAN port that connects to the internet. There's also a single USB 3.0 port that lets you connect storage devices to share files over the network.

Data handling and other processes are taken care of by a dual-core processor with a clock speed of 1.8GHz. This keeps everything working smoothly and facilitates the high-performance users get.

Three network bands are utilized, a 2.4GHz band with 600Mb/s speed and two 5GHz bands with speeds of 1300Mb/s and 1625MB/s respectively. And, thanks to Beamforming, signal transmission is efficient, allowing for lower latencies.

On top of having a Gigabit WAN port, this router also supports Sim cards that can be used as a backup hotspot in case of loss of cable internet. It has a coverage of 2000 square feet and can deliver top speeds of up to 2.2Gb/s. 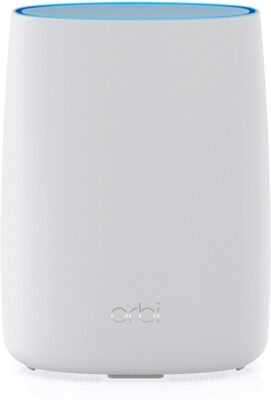 This system is built for reliability and ease of use. It supports cable internet, but in cases where that is not available, or the connection is unreliable, there's a Sim card slot you can use to create a 4G hotspot and continue to browse the web.

At the back, you get two Ethernet ports, one for WAN and the other one for LAN. This provides high-speed cable connections to devices that need it.

The router has a signal range of up to 2000 square feet, and even that can be extended by adding more nodes to the mesh.

Using the Orbi app, the device can be configured and managed in a few simple steps. It also uses Circle parental protection features to block some sites and traffic and to set time limits on network use.

The router has a 20-device capacity and can deliver speeds of up to 2.2Gb/s.

This 8-stream Wi-Fi router can deliver speeds of up to 6.6Gb/s to devices within a range of 2500 square feet. Thanks to the 6 inbuilt antennas, the device can support numerous devices over three separate Wi-Fi bands. 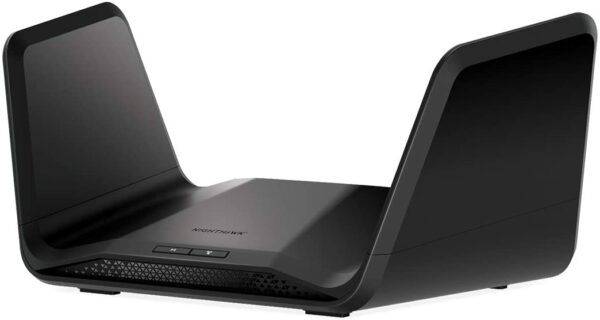 This device uses Netgear Armor, a security system powered by Bitdefender to keep your data and network safe while connected to the internet. It also supports VPN and various Firewall configurations.

It is easy to set up and manage with the help of the Nighthawk app which can also be used to test and monitor the network.

This is a Wi-Fi 6 device, meaning you get the benefits of better network traffic handling and power savings alongside improved security with the help of the WPA3 security protocol.

The device allows up to 8 separate data streams, meaning 8 devices can stream data to the device simultaneously, thus reducing network latency. It also has 6 antennas and supports signal Beamforming.

There are four LAN ports, two of which support link aggregation for faster transfers. A fifth WAN port is also included, and there's a USB port that can be used for storage devices.

With 6 antennas and support for MU-MIMO, this device ensures multiple devices can stream data simultaneously. Besides that, it can deliver speeds of up to 3Gb/s and comes fitted with a 1.8GHz dual-core processor.

Having the peace of mind of knowing you are protected by Netgear Armor is a key feature of this device. It comes with parental control based on the Circle app. It also comes with the ReadyShare Vault, an application that lets you configure automatic updates for the computers connected to the network.

The device is easy to set up and manage using the Nighthawk app, and it offers high performance with speeds of up to 3Gb/s. This is possible through three bands that operate at 450Mb/s 1300Mb/s and 1300Mb/s (2.4GHz, 5GHz, and 5GHz respectively).

There are 6 external antennas on this device, and they support Beamforming, which focuses signals on the device that's using them, rather than broadcasting in all directions. Additionally, the antennas give the device a wide range of Wi-Fi coverage.

For wired connections, there are 4 Gigabit LAN ports at the back. A fifth WAN port is used to connect to the internet. There's also a USB 3.0 port for storage media sharing.

With a tri-band router from Netgear, you can have many devices connected simultaneously without suffering interference from each other. Each band acts as a separate network and new devices are connected to different bands depending on their needs and traffic.

Faster 5GHz bands are ideal for applications that require low latency like online gaming. The 2.4GHz band is slower but offers an increased Wi-Fi range.

Some tri-band Mesh routers use one of the bands to communicate with each other and leave two bands for the users.

Households with many devices consuming network traffic will benefit from a tri-band router. An added benefit of long signal coverage and numerous device support makes these devices great for both home and business use.

For more information about the products check out the official website at the following links: