As the demand for PCs increases in 2021, the supply for pre-built PCs increases as well. Most PC enthusiasts prefer their builds to be custom-made.

It offers the freedom to specifically handpick the components and the bragging rights to having built something from scratch.

There are a few things to consider before building a PC. It involves the rigorous process of doing extensive research for all of its components.

Moreover, there is always the possibility that anything could go wrong since the parts that will be used are mixed and matched accordingly.

This is where iBUYPOWER Gaming PCs come in. They are already well researched and put together by professionals in the industry. They are the most recommended choice for those who are unfamiliar with the whole PC building process.

Another important factor to put into perspective is the amount of time that can be saved when purchasing pre-built PCs. It can also be a cheaper alternative, most of the time.

Saving time and money are the main reasons why pre-built PCs are becoming a trend in today’s modern age. Here’s an in-depth review of 8 of the best iBUYPOWER Gaming PCs that we recommend in 2021.

Our Top Picks for the Best iBUYPOWER Gaming PCs

Here are some of the top picks from iBuyPower Gaming PCs.

This is one of iBUYPOWER’s budget-friendly Gaming PCs. It’s a solid low-end build with the AMD Ryzen 3 3100 as the CPU and the AMD Radeon RX 550 as its GPU, all housed in a tempered glass gaming case with 16-color RGB lighting.

It has Wi-Fi and Windows 10 Home included. It also comes with a free iBUYPOWER gaming keyboard and mouse. 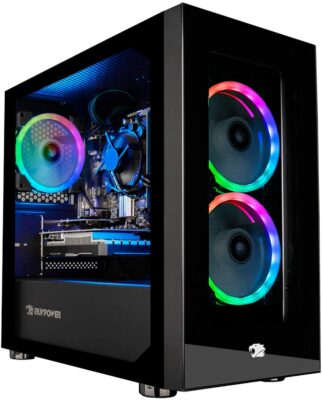 This build is the lightest PC by iBUYPOWER. The LED button on the front panel is a convenient addition for a controlled RGB lighting experience.

The 240GB SSD is probably not enough, especially for gaming. But it does have the option for expansion whenever it is demanded.

Like most AMD’s Ryzen processors, the Ryzen 3 3100 can also be overclocked for improved performance, although overclocking would lead to high temperatures if used over long periods of time.

Gaming-wise, it might not be the best choice for playing some of today’s demanding Triple-A games. The RX 550 GPU only comes at 2GB capacity which could support those games but definitely not at its full capacity. As for most multiplayer online games, it will certainly deliver a smooth overall experience with satisfactory frame rates and graphics.

The MR series by iBUYPOWER comes in three different elegant designs. The Element MR 9320 can be considered as a high-end build with Intel i7-10700F as its CPU and the NVIDIA GTX 1660 Ti as the GPU.

It includes Wi-Fi and Windows 10 Home for the OS. An iBUYPOWER gaming keyboard and mouse can be availed as additional options as well. 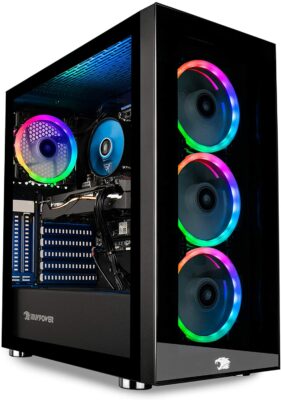 Its design comes with tempered glass covering the front and side panels which showcase an illuminated interior build.

It also comes with four RGB fans for optimized airflow. The 240GB SSD and 1TB HDD are more than enough for storing games and other files.

The Intel i7-10700F is no mediocre CPU. It has 8 Cores, 16 Threads and can be overclocked up to 4.8GHz. Paired up with the 16GB DDR4 RAM, it results in a smooth overall performance.

The NVIDIA GeForce GTX 1660 Ti is one of the most cost-efficient GPUs in the market today. The GPU can support up to 144fps at high settings. With the overclocking capabilities of the CPU, this GPU can boost your overall gaming experience.

The iBUYPOWER 1000iV2 is a high-end build with an Intel i7 CPU and RTX 2060 GPU. This build is one of iBUYPOWER’s most powerful gaming rigs. It appears in a simple yet modern design with streaks of RGB lighting glowing out of the front panel.

It’s Wi-Fi-ready and comes with the Windows 10 Home OS installed. It has an iBUYPOWER gaming keyboard & RGB gaming mouse included in the package. 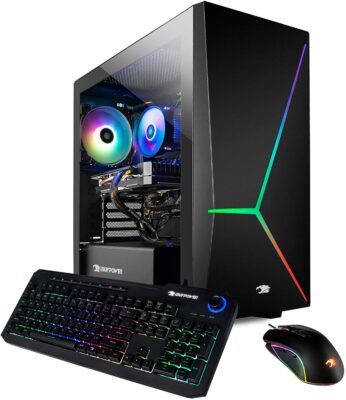 The parts of the iBUYPOWER 1000iV2 are housed on a tempered glass gaming case with a 16 color RGB lighting option. The internal storage adds up to almost 2500GB with the 480GB SSD and the 2TB HDD.

A key highlight for this build is its GPU. The NVIDIA GeForce RTX 2060 is a powerhouse with a 6GB capacity for graphics. Combined with the Intel i7 CPU and the 16GB RAM, it effortlessly becomes one of the smoothest pre-built Gaming PCs in the market.

The Trace 4 9310 by iBUYPOWER showcases an AMD Build. It includes the Ryzen 5 3600 CPU paired with the Radeon RX 5500 XT. The two core components by AMD in this build are among the top cost-effective duos in Gaming PCs.

Windows 10 Home is installed as its OS and it’s also Wi-Fi-ready. A generic keyboard and mouse are included. 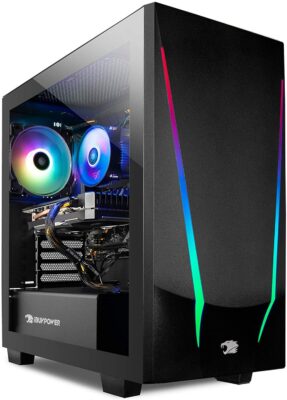 Altogether, the CPU and GPU can support most of the games out today. The duo delivers competitive frame rates on high settings, even for triple-A games. The side panel is designed for optimized airflow to keep the parts cool.

The 240GB SSD storage may be an issue with this build, but the expandable storage option addresses it right away.

A key feature of this build is its RGB lighting. It is customizable through downloading an app that allows users to conveniently express their choice of color and style.

The Element MR 9270 is one of the three MR Series Gaming PCs pre-built by iBUYPOWER. It has the simplest design among the three. A key feature that separates it from the two is the GPU.

It’s Wi-Fi ready and the Windows 10 Home OS is installed as well. An iBUYPOWER gaming keyboard and a mouse comes for free in this package. 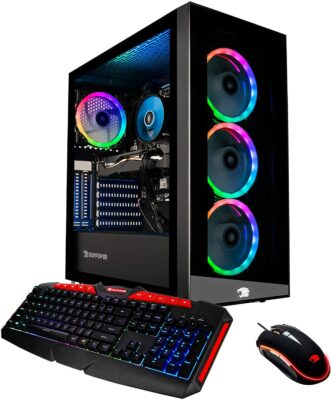 The PC has durable tempered glass on the side and front panels. The panels help showcase the four ARGB fans that are included in the package.

It has additional features like the VR option and the RGB case lighting. These features, aside from the GPU, separate the Element MR 9270 from the rest of the MR Series.

The Intel i7-9700F CPU is a powerful processor and it can be overclocked as well. The NVIDIA GeForce RTX 2060 Super GPU has a resounding 8GB VRAM capacity for graphics. Entirely, it supports the latest ray tracing technology for games to be played at competitive frame rates with high to ultra settings.

With 16GB of RAM, multitasking is not a problem with this build. The 240GB SSD and the additional 1TB HDD storage are perfect for storing games and other files with large sizes.

This PC build has a CPU and GPU to support high-resolution gaming and rendering. It comes in a clear tempered glass that fully displays an illuminated interior.

The package includes a Woov Mouse Pad Bundle, a mouse, and a keyboard. It’s also Wi-Fi-ready and has Windows 10 installed as its OS. 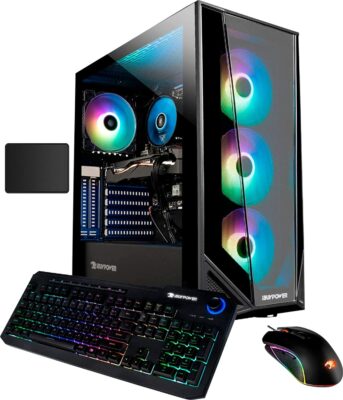 The PC is efficiently lightweight for a high-end build. The processor for this PC is the Intel i7-10700F and can be overclocked up to 4.8GHz.

The NVIDIA GeForce GTX 1660Ti is its GPU. It has a 6GB VRAM capacity to support high-ultra graphics with the recommended frame rates for gaming, streaming, and video editing.

The internal storage consists of a 1024GB SSD and a 1TB HDD. It has plenty of space for games and other files. It also comes with 32GB RAM which is more than enough to provide a smooth overall experience especially when multi-tasking.

The BB981 by iBUYPOWER can be considered a high-end build. Tempered glass covers the front and side panels which showcases the RGB illuminated parts inside.

It’s Wi-Fi-ready and the OS installed is Windows 10 Home. It also comes with a free RGB Backlit Keyboard and a Razer Gaming Mouse. 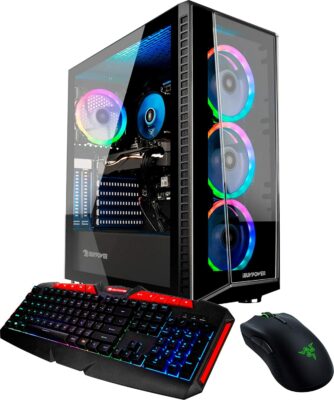 The processor for this build is the Intel i5-9400F. It can be overclocked up to 4.10 GHz, therefore, it can also compete with the higher-gen CPUs of Intel.

The GPU for this build is the NVIDIA GTX 1650 SUPER. It has a 4GB VRAM capacity that supports most of today’s latest games. With 16GB RAM, this build can multitask with ease.

The 240GB SSD is usually allocated for the OS to successfully boot up in a matter of seconds. The 1TB HDD provides sufficient storage and backup for games and other files.

This build is a mid-tier Gaming PC by iBUYPOWER. The Intel CPU and NVIDIA GPU combo on this build has been tried and tested with the latest games of today. For those who seek budget Gaming PCs, this build is definitely one to consider.

It comes with a Woov Accessory Bundle which includes an HDMI cable, a USB extension cable, and a mouse pad. It also includes a free keyboard and a Razer gaming mouse.

The Intel i5-10400F has 6-cores and 12 threads which offer good gaming and application performance. The NVIDIA GeForce GTX 1650 has a 4GB VRAM capacity for graphics.

This PC build by iBUYPOWER can readily handle immersive gaming and HD video editing. It is also supported by the 16GB DDR4 RAM for a smooth multitasking experience.

The internal storage is sufficient for backing up a lot of games and files with the 512GB SSD and 1TB HDD. Moreover, it can support multiple displays. It can provide convenience for gaming and even working at the same time.

The main selling points of pre-built PCs are time, budget, and convenience. Not everybody has the time or budget to custom build their PCs. Moreover, searching for the right parts can be a hassle especially when the components aren’t available in one store or market.

Going for a pre-built PC is most recommended for beginners and busy people. The satisfaction and freedom of building a PC from scratch will surely be missed out, but the satisfaction of owning a PC without having to sweat for it can be satisfying too.

It all boils down to personal preference. Weighing in the advantages and disadvantages, the whole pre-built vs custom-built PCs debate will continue to be a long and arduous one. What's your choice?