KDE is the leading desktop system for linux, and is very rich in features. I prefer it over gnome and have been using it for years now. It keeps getting better with each new release.

KDE has lots of features to enhance productivity. It has infact more features than any other desktop system existing anywhere. One useful feature is the desktop widgets, called Plasmoids. Plasmoids are small programs that keep running on the desktop and do small tasks like show latest data from some source or status of some activity or similar. The desktop itself is called the Plasma desktop.

Right click on the desktop and click "Add Widgets" and a horizontal widget selection bar would come up, showing all the available widgets. There are widgets to show battery usage, clock, system usage, sticky notes etc. Actually everything on the kde desktop is a widget. The menu, taskbar, pager, panel and everything. The desktop houses each widget as a unit.

By default if you add a plasmoid/widget to a desktop, it becomes visible on all desktops (if you have more than 1). Same with the wallpaper, whatever wallpaper you set, is set for all desktops.

Now you might want to have different sets of widgets on separate desktops. For example the first desktop has the widgets to assist you in work. The 2nd desktop has widgets to show news, latest information from some rss reader and so on. There is a very simple setting to do this. Right click the pager and go to Pager Settings. Go to the "Virtual Desktops" tab and select "Different widgets for each desktop". 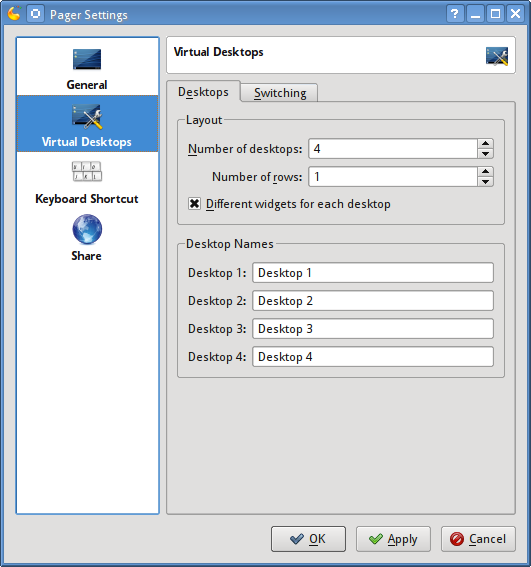 By choosing this setting, each desktop would get a separate set of widgets. The wallpaper too would be separate for each desktop.

If you are not using a pager, then the same setting can be found in "System Settings" 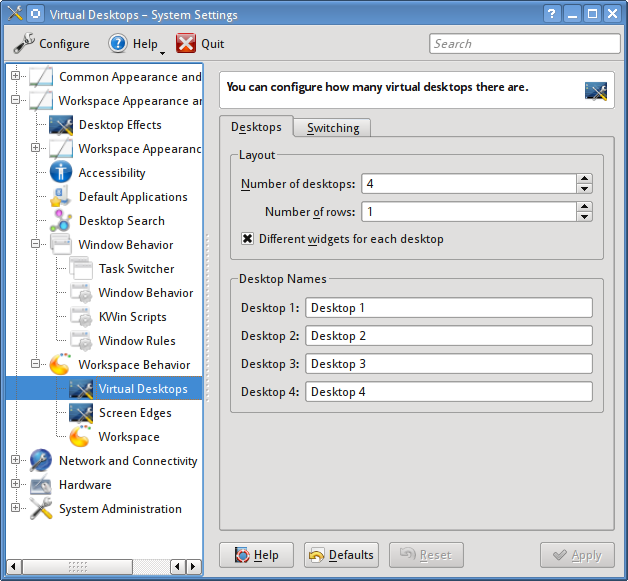 2 thoughts on “Use different widgets on each desktop on KDE”