AIO Cooler come in varying sizes in terms of the radiator length, and 120mm is the smallest size.

The radiator typically fits a 120mm fan and provides moderate levels of cooling.

Compared to your regular air coolers, AIO coolers contain a special type of liquid. It's usually a combination of distilled water and a thermally conductive fluid enclosed in a loop through a tubing system.

Compared to the more popular 240mm size aio coolers , the 120mm coolers are less powerful in terms of cooling and can be usually easily outperformed by similarly sized air coolers.

Remember that the cooling capacity is directly proportional to the radiator size. More-over due to smaller radiators in 120mm aio coolers, the fan will have to spin faster to dissipate heat resulting in more noise that might not be very comfortable for everyone.

Ideally 120mm aio coolers should be used if you are using a low tdp/thermal cpu and you want a cool looking aio cooler with RGB effects in a compact build.
Otherwise it is better to go for an air cooler or a 240mm cooler.

If you plan to use a 8 core or more intel/amd processor or do overclocking of any kind of any other cpu intensive work like video editing, then 120mm aio coolers are not recommended. Get a 360mm aio instead.

Here are some of our top picks for 120mm aio coolers. Top brands include Cooler Master, NZXT, EVGA and Corsair.

Based in Los Angeles, California, NZXT is one of the most trusted computer hardware manufacturers in today's market. The Kraken M22 is their only 120mm AIO cooler entry from their Kraken Cooler Series.

The cooler can have a warranty of 3-6 years depending on the supplier. With that much time allocation for warranty, it's safe to say that the Kraken M22 has durability and reliability in check. 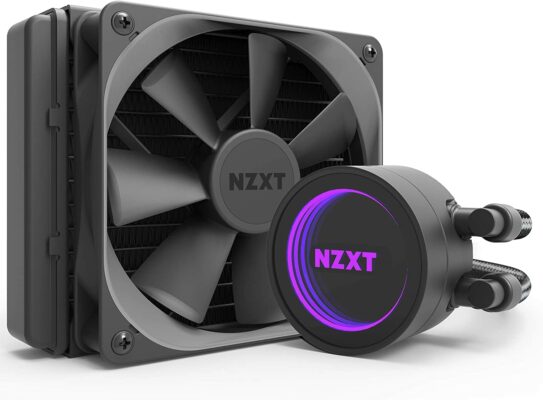 The NZXT Kraken M22 showcases the infinity mirror design that sets it apart from the competition. The CAM software offers a customizable lighting control that makes way for a vigorous RGB lighting experience.

The precision-engineered Aer P120mm PWM fan delivers powerful cooling performance with a fan speed capacity of up to 3000 Rpm. It also has a reduced fan noise level of around 21-36 dB.

The liquid cooler's CPU socket support is compatible with most Intel CPUs including Core i3, Core i5, and Core i7. It is also compatible with Ryzen CPUs like the Athlon X4, Phenom, and their latest Ryzen 9 series.

Its size is suitable to fit in most mid-tower builds and even a mini-ITX case if installed correctly.

Corsair Gaming, Inc. has been around since 1994 and they're famously known to produce high-quality computer hardware and peripherals. The American company is mainly based in Fremont, California.

Corsair currently has four 120mm AIO coolers available in today's market. The H60 AIO Liquid CPU cooler is their latest entry from their Hydro Series in the 120mm category. 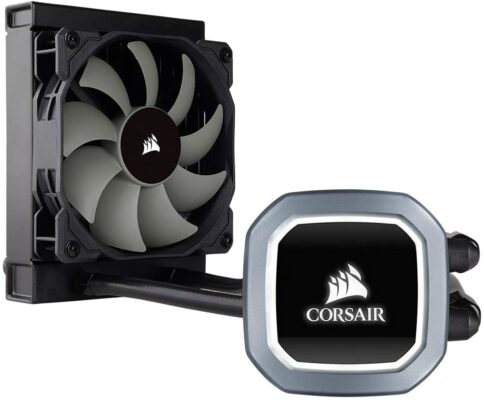 The H60 AIO liquid cooler comes with a 120mm Corsair SP Series PWM fan. It has an adjustable fan speed with a capacity of up to 1,700 RPM. It can maximize the airflow output up to 57.2 CFM (Cubic Feet per Minute).

The H60 also features a 120mm aluminum radiator which helps lower temperatures. It fits in most mid-tower ATX builds and even micro-ATX cases. Noise level is expected to reach 28.3 dBA at the maximum.

The improved white LED illuminated pump head and new cold plate give off major aesthetics and efficient overall performance. It's easy to install and it doesn't take up too much space in the build.

It is compatible with all the latest Intel and AMD CPU sockets. It also comes with a pre-applied thermal paste to further support normal and light overclocking.

Cooler Master Technology Inc. was founded in 1992. The company is based in Taiwan. It has produced quality computer hardware ever since.

The ML120L RGB v2 is Cooler Master's latest 120mm entry from their popular MasterLiquid Lite Series. It has new and improved specifications, granting your PC builds the cooling it needs. 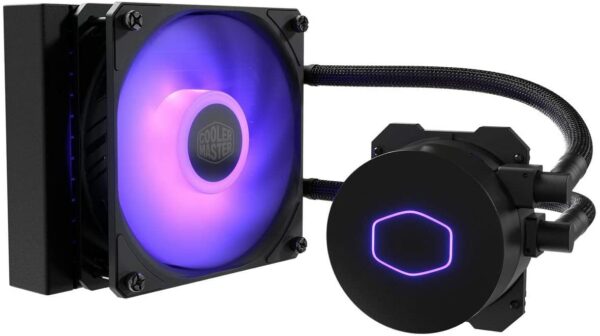 This AIO liquid cooler was designed for both functionality and aesthetics. The ML120L v2 RGB features an improved 3rd generation dual-chamber pump which offers better liquid cooling performance compared to its predecessors.

The RGB lighting solution is fully customizable, a must-have for RGB enthusiasts. The RGB lighting can be utilized through Asus, Gigabyte, MSI, and ASRock RGB Applications.

With the brand new SickleFlow Fan, this cooler maintains an airflow of up to 62 CFM and an air pressure of 2.5mm H2O. This feature allows the cooler to be quieter and more efficient. It has RGB lighting and it's customizable as well.

For heat dissipation, the radiator on this cooler was designed and improved to cover a larger surface area. It permits better airflow optimization on your PC build to ensure cool temperatures over long periods of use.

EVGA Corporation's main headquarters are located in Brea, California. It is an American computer hardware company founded in 1999. They are famously known for producing NVIDIA-GPU-based graphics cards.

The company has since then expanded its line of products. They also manufacture motherboards, power supply units, computer peripherals, and most importantly, AIO liquid coolers. 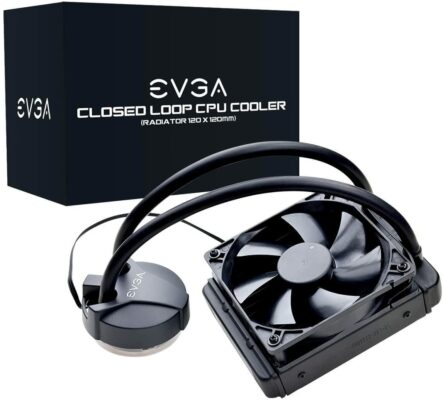 The most distinguishing feature of this AIO Liquid cooler is its self-containment. It doesn't require any filling, no custom tubing, and there's no need for maintenance. EVGA CLC is well-organized and easy to install.

The cooler has a copper base and an improved cooling block, providing maximum heat transfer and optimized flowrate. A 120mm fan is also included to help dissipate heat and maintain cool temperatures. The fan is interchangeable and customizable.

The airflow of this cooler has been measured to be at 58.87 CFM at the maximum. The noise level has also been measured at a maximum of 20.0 decibels.

Asus engineers and designers developed a brand dedicated to gaming in 2006, and they named it ROG (Republic of Gamers). In 2021, the brand has produced a wide variety of quality computer hardware, including AIO Liquid CPU Coolers.

There are only 2 AIO Liquid CPU Coolers in ROG's RYUO Series. The ROG RYUO 120 is their 120mm entry and it packs some notable features. 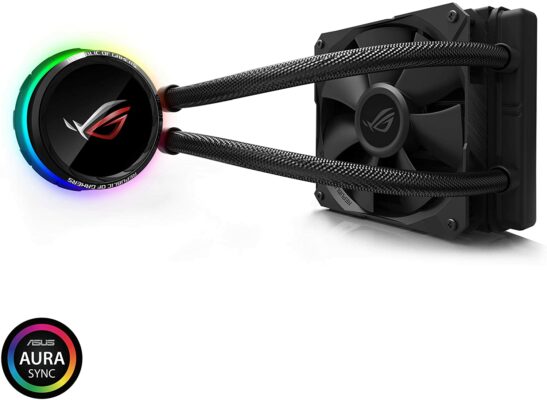 ROG did not disappoint on this AIO liquid cooler in both aesthetics and performance. It is compatible with the latest AMD and Intel CPUs available today.

Asus' LiveDash OLED Display has its software that allows users to add logos, animations, temperature, and even fan speeds on the panel. The cooler also features ARGB lighting which grants users the freedom to sync light effects through the Asus AURA Sync app.

The higher the CFM, the better the airflow. The ROG RYUO 120 has been measured to reach a CFM of around 81 and 5.0mm H2O for efficient cooling performance. All thanks to the cooler's improved 120mm radiator fan, aluminum pump, and water block.

Noise level is tested to reach a maximum of 37.6 decibels. The cooler especially looks and works best when paired with their ROG motherboards.

Thermaltake Technology Co., Ltd was founded in 1999. The company's main headquarters is located in Taipei, Taiwan. The company also has several manufacturing facilities all over the globe.

The TH120 AIO Liquid Cooler is Tt LCS Certified. Tt LCS is a Thermaltake exclusive certification that applies to their products. It ensures they're of the highest standards to give you the best performance for your PC builds. 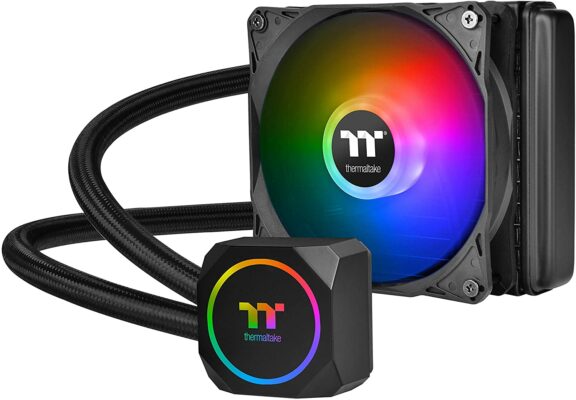 The water block has an improved copper base plate allowing better heat conductivity and efficient cooling performance. The TH120 requires no coolant refill at all since it has reinforced-sleeved low evaporation tubing.

The cooler covers a larger surface area thereby improving cooling performance and heat dissipation. It comes with a 3-year warranty and is compatible with the latest AMD and Intel CPUs out today.

EKWB, also known as EK Water Blocks was founded in 2003. It is a company based in Slovenia and they're best known for manufacturing quality PC cooling hardware. 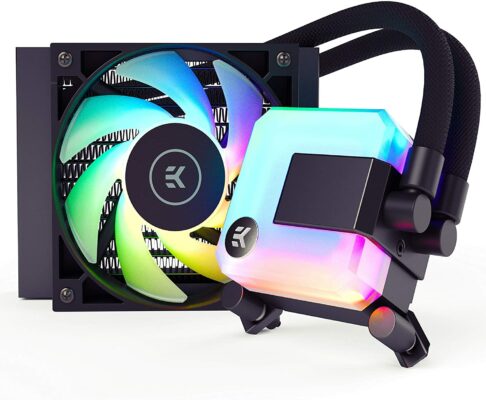 D-RGB and ARGB are one of the same and this AIO cooler has taken advantage of it through its pump, radiator, and fans. The lighting is fully customizable via the motherboard or the included RGB controller.

The EK-AIO 120mm has a CPU water-block that is universally compatible, which easily fits with Intel and AMD CPUs. The water-block is also RGB customizable as it features an acrylic light diffuser.

The cooler includes ultra-quiet D-RGB fans that are designed to give you high-performance liquid cooling. The fan's airflow capacity is tested to reach a maximum of 66 CFM. Fan speed can also be adjusted to run speeds between 550-2200 RPM via the motherboard or the fan controller.

The diamond-cut rotary fittings design allows for the rubber tube's easy installation and adjustment for any case. Noise level reaches a maximum of only 33.5 decibels.

The H80i V2 Cooler by Corsair is its first entry from the Hydro Series in the 120mm category. The Hydro Series is created by Corsair mainly to offer PC enthusiasts the power of liquid cooling in a durable, and easy-to-install bundle.

The cooler was first released in 2016 and it still competes with the latest 120mm AIO coolers in today's market. All of Corsair's Hydro Series products come with a 5-year warranty. 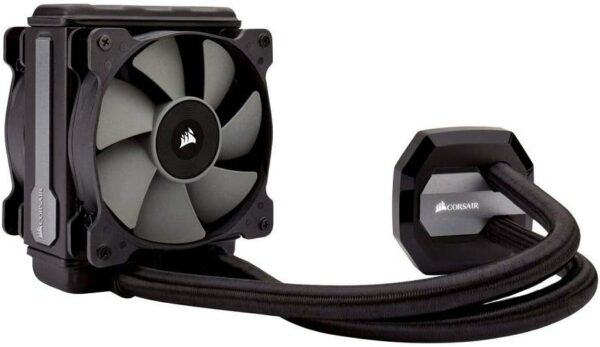 The radiator dimensions of this liquid cooler are quite bulky but it compensates with a better fan airflow and efficient cooling. Its CFM is measured to reach a maximum of 77.

With the improved cold plate and pump design, this cooler delivers lower temperatures and minimal noise with only 38 decibels at max. An advanced SP120L PWM Fan also comes in the package and it creates better high-static pressure air delivery.

The H80i v2 has a built-in Corsair Link Cable that attaches to a USB header on the motherboard. Through the link, users can adjust and customize cooling performance, fan speed, CPU temperatures, and RGB LED lighting.

The CPU socket supports both the latest Intel and AMD CPUs.

Finding the right AIO CPU cooler is not easy in 2021. First of all, the main concern would be the PC case. Everything has to be perfectly measured in order for your chosen AIO CPU cooler to fit and maximize its cooling performance.

The next factor would be the CPU itself. Luckily, most of the coolers on this list support the latest AMD and Intel CPUs today.

Moreover, all the coolers in this list provide optimal liquid cooling performance. Some are definitely better than others, but they usually cost more. The price to performance ratio is worth considering.

Check out our other post on 360mm aios here:

For more information about the products, check out their official site at the following links: