SSDs come in a variety of shapes and sizes. The biggest size is the 2.5" drives that are installed inside desktop computers.

Then comes the smaller and bare looking M.2 SSDs that are installed inside laptops and even on desktops.

There are a lot of technical parameters that describe M.2 SSD drives about how they work and how powerful they are.

Someone made a nice graphical illustration explaining various kinds of SSDs along with the underlying technologies they use. It was posted on reddit here.

Here is a quick summary table with details:

For fun comparison sake, I also added the speeds of USB 3.2 and 4 respectively. However with USB the speed is highly dependant on the connected device and usually the actual working speed is far lesser than the theoretical limits.

Thunderbolt 4 and the upcoming USB 4 Gen 3 will have practical data transfer speeds comparable to the present m.2 PCIe3.0 x4 NVMe SSDs. So lets wait and watch.

Modern laptops, Mini PCs are compact in size and they use the smallest form factor SSDs which is the M.2. M.2 defines the form factor and the slot types used for these SSDs. Though M.2 SATA and M.2 NVMe are similar form factors, their connection pin layout is different. There are certain M.2 slot that can plug both SATA and NVMe ssd drives, while there are some that can plug only 1 of the 2. 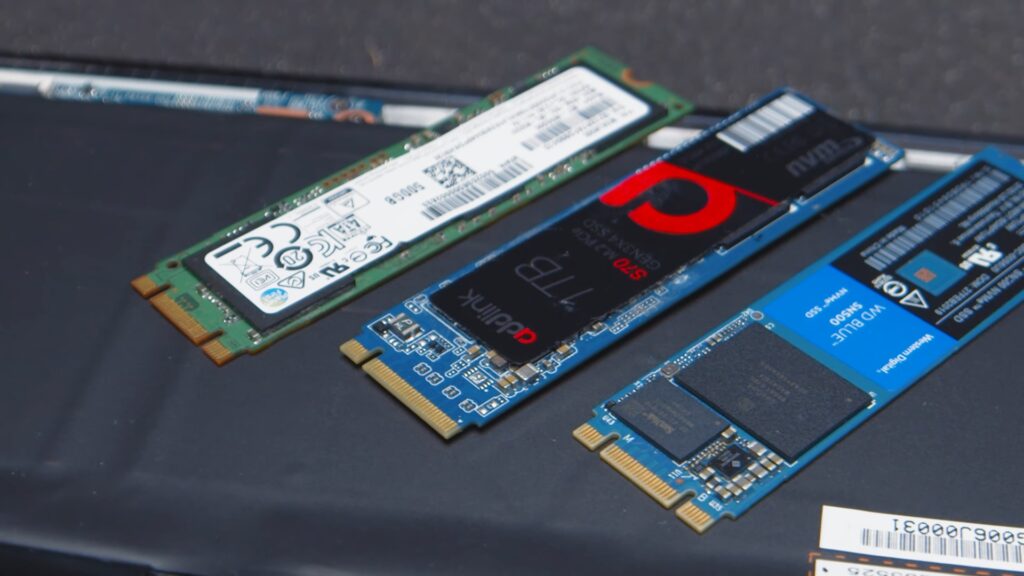 As you can see in the image, M.2 ssds look like bare RAM sticks with all the circuitry exposed. They come in various widthxlength dimensions and a 4 digit number specifies the same. For example, M.2 2280 is 22mm wide x 80mm long. And then there is 2260 and 2242 similarly.

They are small in physical size but not in storage capacity. They are installed directly in their M.2 connector socket somewhere on the motherboard.

Following are the most common types of SSDs seen in desktop and laptops as of 2022.

This is the old style ssds we all are familiar with. Available from numerous brands including Crucial, Western Digital, Samsung, Kingston, ADATA etc.

Available in sizes from 120GB to 2TB and even higher, they are used primarily in desktop PCs and even laptops as primary storage.

They are connected to motherboard using the sata interface cables and have a speed limit of 600 MB/s, which is slower than m.2 ssds using PCIe.

Most recent laptops and desktops are now moving to the newer nvme ssds which are way faster than these traditional ssds.

Several brands like Samsung have also launched the portable ssds which are similar to the 2.5" SSDs but can connect to a system with a USB cable on a USB-C or USB-A port. However these externally connected SSDs are even slower because of the limitations of the USB ports.

The first technical parameter about M.2 SSD drives that needs to be understood is the underlying connection technology. It can be either SATA or PCIe. 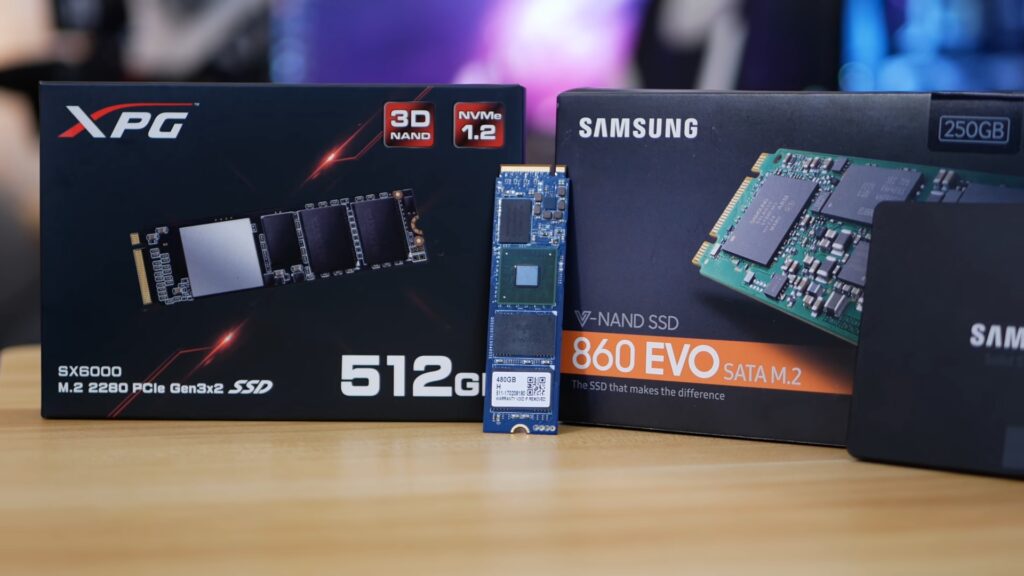 Note that PCIe over here does not mean PCIe slots as you would see on a desktop motherboard. Its the inner circuitry that communicates data between the motherboard and the drive.

Similarly SATA over here does not mean a SATA cable port as you see on motherboards. Its the inner circuitry.

So inside a laptop you can have a M.2 connector interface that uses SATA or PCIe or both underneath. However an SSD will either be M.2 Sata or M.2 PCIe, but not both.

For example a PCIe M.2 SSD would be incompatible with a SATA-only M.2 socket/port. 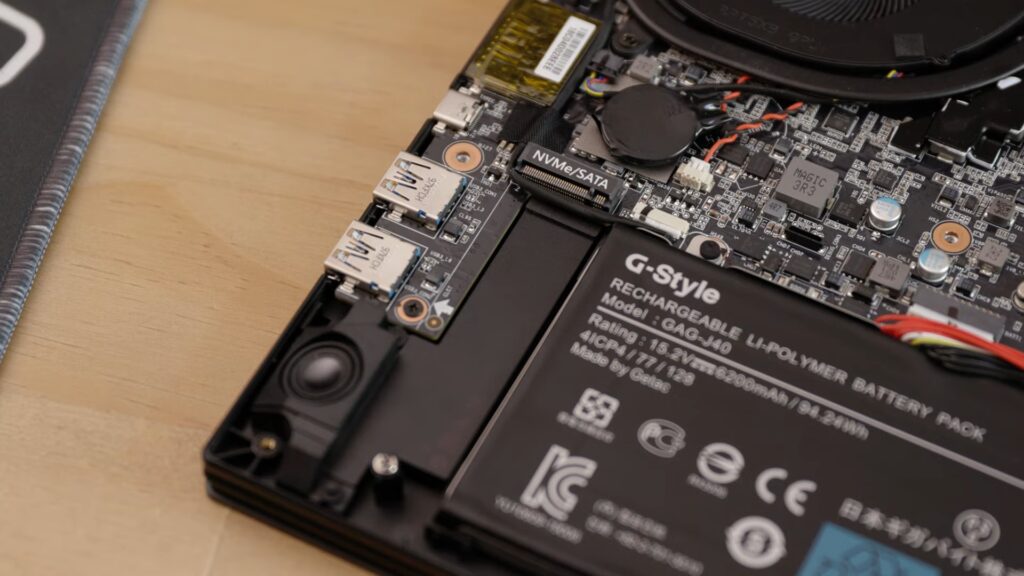 PCIe M.2 is much faster than SATA M.2. SATA specifications support maximum speed of upto 600 MB/s whereas PCIe (gen 2) can go as high as 2000 MB/s and PCIe Gen 3 (x4 lanes) can go upto 4000 MB/s or 4 GB/s though the actual through-put speed will be much lesser depending on the data being transferred.

With NVMe PCIe M.2 is an improvement on the standard PCIe and optimises the data transfer for higher through-put speeds. More on that later.

High read-write speeds improves performance of nearly all kind of applications. However there are certain computing tasks that can see enormous boost in performance with faster storage. These include code compilation, games and video rendering.

Which one to buy for Laptop

If you are buying a Laptop then go for NVMe M.2 storage compared to SATA M.2 or the old HDD/SATA 2.5" SSD. It is currently the fastest storage technology on laptops.

M.2 is more expensive but is considerably faster and has superior performance. If you are on a tight budget then get a laptop which has atleast a small NVMe drive as the boot drive and a hdd for data storage.

If you are upgrading an old laptop that has an HDD, and no NVMe slot, then you can replace the HDD with an 2.5" SSD and still get a good speed boost over the HDD.

It is worth knowing that some older laptops used the mSATA based ssds which is a predecessor of M.2 interface.

Which one to buy for PC

If you are building a desktop pc, then you have multiple options. Now a days there are desktop motherboards that have the M.2 socket/port allowing to connect NVMe SSDs right on the motherboard without having to use a SATA cable like before.

Alternatively you also install PCIe card based M.2 adaptor on motherboards that do not have a dedicated M.2 Slot/port. They plug into the PCIe card slots on the motherboards just like a Graphics Card. Then install an NVMe ssd in it.

But remember that motherboards with NVMe m.2 slots would be more expensive compared to ordinary ones.

It may not be worth the investment unless you are sure that you need super high disk read/write speeds.

NVMe is an improved version of PCIe M.2. Its a new protocol that allows PCIe based SSD to perform even faster.

Typical nvme ssds on laptops and desktops can reach speeds upto 3 Gigabytes/sec. This is way higher than ssd drives connected using sata cables which can go only upto 600 Megabytes/sec.

In simple words, nvme speeds are unmatched by any other technology and it is the future of fast storage on all kinds of computing devices.

At present NVME drives have already become a standard in both laptops and desktops. Most laptops offer around 128GB-1TB NVME storages.

Whereas desktops have the option to use a motherboard with m.2 slot where in a nvme ssd can be installed.

Crucial also has an article on their website explaining stuff about PCIe, SATA and M.2
https://www.crucial.in/articles/about-ssd/m2-with-pcie-or-sata