Wi-Fi 6 has brought many improvements over Wi-Fi 5. To transition to the new generation, you will need a Wi-Fi 6 router, and Linksys has several models to offer.

With Wi-Fi 6, many more users can utilize the network simultaneously with very little downtime or interruptions. This is made possible by MU-MIMO (Multi-User, Multiple-Input, Multiple-Output) technology.

To improve network range, some Linksys routers are built to work in a Mesh system, whereby new routers can be added to the network and amplify the signal for devices that are farther from the central router.

Wi-Fi 6 is also more power-efficient, even for connected devices, and has better tolerances to interference from other wireless signals compared to Wi-Fi 5.

Linksys makes some of the best wifi 6 routers in the industry. Most of their routers support mesh configuration and are easy to setup. They are quite ideal for home and office use and can be used for heavy load network tasks like streaming.

Below are some of our top picks for Linksys Wifi 6 routers. Key features to consider would be device capacity and maximum bandwidth.

This router can be configured in a mesh architecture (AX12600) for wider network coverage. Each node (AX4200 unit) in the mesh comes with its gigabit LAN ports and supports three wireless bands for better performance. 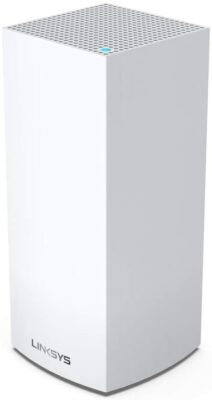 This router uses three Wi-Fi bands with speeds of 600Mb/s, 1200Mb/s, and 2400Mb/s on the 2.4GHz, 5GHz and second 5GHz bands. This tallies to a total speed of 4.2Gb/s, and the router connects each new device to the least crowded or best-performing band it can find.

Being a mesh Wi-Fi system, this router can be connected to other similar ones, a configuration that’s useful in large houses for reducing dead zones and increasing Wi-Fi coverage.

It is easy to set up, and you get the choice of doing this either through the Linksys app or from a web portal. You also get better security features such as automatic firmware updates as well as a separate guest network. There are also parental control settings to ensure the safety of young ones online.

At the back of the device, there are 4 Gigabit Ethernet ports. A single USB port can be used to share files from an external storage device over the network.

The Linksys AX4000 is a mesh Wi-Fi system that can deliver wide coverage areas of up to 5400 square feet when using just two nodes in the MX8000 configuration. It also supports up to three Wi-Fi bands for highly stable wireless connections and comes with ethernet ports at the back for wired connections. 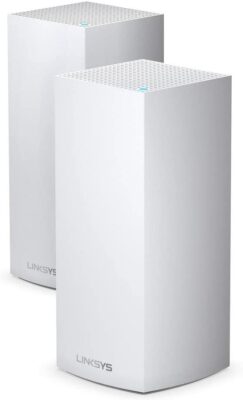 This router is ideal for modern homes with many smart devices, and it allows the connection of up to 80 devices on the same network. This is made possible through its support for Wi-Fi 6, which improves network capacities.

The router has four internal antennas which boost the wireless range. These also support 4x4MU-MIMO which means that you get up to four streams, allowing multiple devices to send and receive data simultaneously without having to queue.

The system is powered by a quad-core processor and is capable of delivering speeds of up to 4Gb/s, enough for heavy network usage on multiple devices without significant lags. This is further made possible through its multi-band support whereby new devices are connected to the best available network band.

Three Gigabit LAN ports are also provided for cabled connections, with a fourth WAN port that connects to the internet.

There are useful security features such as guest networks and parental controls. These can be configured from anywhere through the mobile app, or via a web portal.

This high-speed mesh Wi-Fi system can deliver speeds of up to 5.3Gb/s and can support about 50 connected devices. The Mesh system lets it reach the farthest regions of your house, hence eliminating dead zones.

It supports 3 Wi-Fi bands, and as a mesh system, can be connected to several other routers of its kind for a wider network reach. 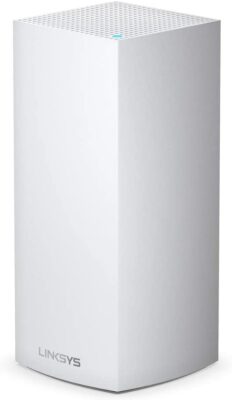 This mesh Wi-Fi system offers high network speeds over three Wi-Fi bands, one 2.4GHz band, and two 5GHz bands. At full speed, you can get speeds of up to 5.3Mb/s.

There are four Gigabit Lan Ethernet ports on the router that can be connected to devices for stable wired networking. A single WAN ethernet port is also provided. The unit comes with a USB 3.0 port that can connect to external devices.

With the use of OFDMA, the router can receive and transmit data to multiple users simultaneously. This is further enhanced by the fact that the router supports up to 12 Wi-Fi streams.

In a home with many smart devices, users will be comfortable, knowing that the router can support up to 50 connected devices. And, to ensure that the signal reaches all corners of the house, you can get another similar router and configure it as a satellite node with the help of the Linksys app.

This dual-band router from Linksys is capable of delivering speeds of up to 3.2Gb/s. It comes with four-gigabit ethernet ports at the back for connecting to wired networking devices, and the Wi-Fi network can support up to 25 connected devices. 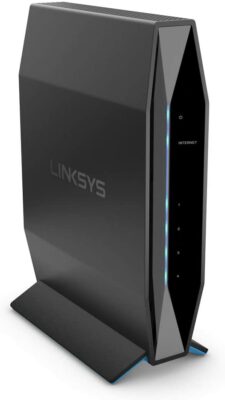 The router has a range of about 2500 square feet. This lets it easily reach all corners of a small to medium-sized house. Other than that, it has 4 built-in antennas and the capacity to hold about 25 connected devices.

This is a dual-band system that connects devices to the best available Wi-Fi band. As a result, stable connections can be maintained across all the connected devices.

At the back are 4 Gigabit Ethernet ports for wired devices. These are flanked by a USB 2.0 port which is a bit slow but can be used for basic file sharing.

The system is powered by a 1.4Ghz processor which helps in maintaining high network speeds of 3.2Gb/s, making it much easier to stream 4K content and also play games.

With added security features like parental control and guest network support as well as automatic firmware updates, you can be sure that the network is safe from malicious individuals. All the configurations can be done from the comfort of your phone or a web portal.

This unit runs on a 1.2 GHz quad-core processor and is capable of delivering speeds of up to 1.8Gb/s. You can use the unit independently, but thanks to Smart Mesh technology, it can be connected to other compatible routers to increase the range and wireless network performance in your home. 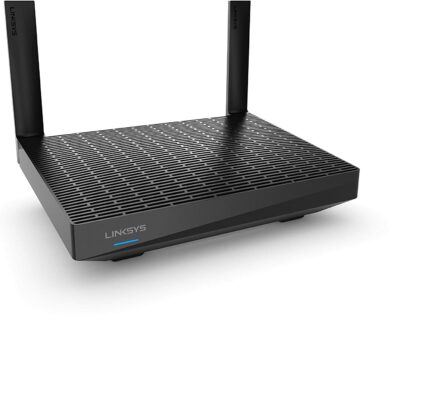 Apart from supporting guest access and having parental control features, the Linksys AX1800 (MR7350) lets you prioritize different client devices connected to the network. This feature ensures that devices that need faster performance receive it.

On that line, the router is capable of speeds of up to 1.8Gb/s. Wi-Fi speeds will vary depending on various factors, but there are also 4 Gigabit LAN Ethernet ports at the back with a fifth one that connects to the internet. For device and file sharing, there’s a USB 3.0 port too.

The network can reach over an area of 1700 square feet and supports over 25 connected devices. This is made possible through Wi-Fi 6’s increased device capacity for routers. Additionally, security features such as WPA3 can also be implemented to keep the network secure.

The device is easy to set up and supports mesh topology which can improve wireless range as well as the number of devices supported by this dual-band router.

This is a dual-band router that offers fast speeds for surfing, gaming, and video calls. With up to 1.8Gb/s speeds and coverage of 1500 square feet, this router can handle many devices. And this is seen in its capacity to support more than 20 simultaneously connected devices. 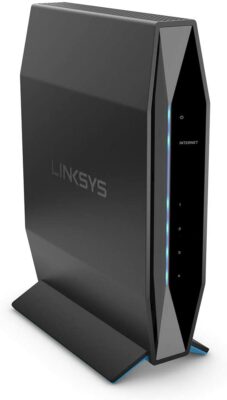 With Beamforming technology, this router can focus signals to a specific device, allowing for faster performance as opposed to broadcasting the signal on all sides.

Still, on performance, the device is rated for speeds of up to 1.8Gb/s. Being a dual-band system, the speed is shared across the bands, and new devices connecting will be sent to the best available wireless band.

The device can act as a media server as it supports various features including DLNA. And, with the added advantage of a USB 3.0 port, file transfers can happen rapidly.

Cabled networking is fast too, as there are 4-gigabit ethernet LAN ports plus one Gigabit WAN port, bringing the total to five.

To ensure the connections are stable, two internal antennas are used. Furthermore, the router implements various security features like parental control and automatic firmware updates to ensure the home network is protected from intruders.

This is a dual-band Wi-Fi 6 router that can be used as a standalone router or be connected to others in a Mesh architecture to improve the Wi-Fi coverage of your home. It has two external antennas which provide a range of 1500 square feet and also support Beamforming technology. 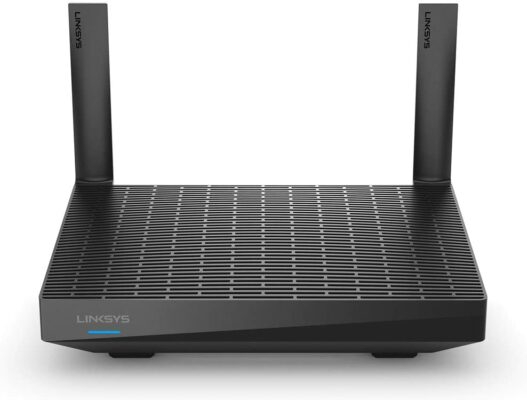 The router can be placed on a surface, but it also has wall-mounting slots for situations where you need to place it somewhere accessible.

Wired networks run through any of the four available Gigabit Ethernet LAN ports. The fifth ethernet port is dedicated to WAN Internet connections.

With child and parent modes, users can make the router as filtered as it needs to be. There are also more fine tuned parental controls, and with the help of the Linksys app or a web portal, you can not only conveniently set up the device but also set up and manage other things, including guest networks.

This is a great choice for users looking to future-proof their home networks. With Wi-Fi 6 support, you can connect more devices. Its most compelling feature is the high transmission speeds of up to 6 Gb/s. This will allow smooth 8K streaming and lag-free gaming. 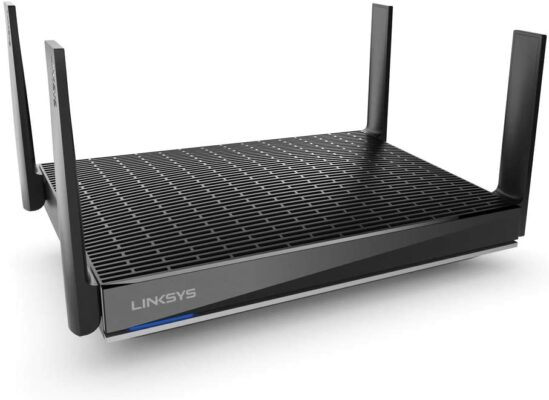 This router comes with four antennas that allow it to achieve a range of up to 3000 square feet. This, of course, depends on whether or not there are obstructions. It is powered by a 1.8Ghz quad core processor and can deliver fast speeds of up to 6Gb/s.

The device has Intelligent Mesh capabilities which means that it can work standalone or be extended by connecting it to other compatible Intelligent Mesh-compatible routers. This reduces dead zones and provides fast internet access to more corners of the house.

The router can be set up using a mobile device, and once done you can manage it from anywhere. It has useful security features to safeguard devices connected to the network, and the USB ports can be used to share files wirelessly or via ethernet through the network.

Linksys Wi-Fi 6 routers are available in different models, offering different speeds and varying features. To get the most out of your router, you will need devices that already support this new Wi-Fi generation.

If you have a very large house, opting for routers with the Intelligent Mesh feature will allow you to easily scale your network to reach more rooms. This will cost more but offer more speed and stability in the long run.

For those who rely heavily on wired networking, opting for a router with high-speed Gigabit ethernet ports is essential, and, more ports mean more devices can connect to the wired network simultaneously.

For more information about the products check out their official page at the following links: